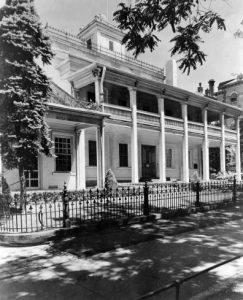 The Beehive and Lion houses were constructed in 1854 and 1856, respectively, as homes for Brigham Young, territorial governor and second president of The Church of Jesus Christ of Latter-day Saints. The Beehive House served as the executive mansion of the Territory of Utah from 1852 to 1855 and was Brigham Young’s official residence where he entertained important guests. It was also the residence of Lorenzo Snow, LDS church president from 1898 to 1901, and Joseph F. Smith, president from 1901 to 1918, both of whom died there. The Lion House was home for up to twelve of Brigham Young’s wives and his children by them. Here in 1869 Young founded for his daughters the Retrenchment Society, which later became the Young Women’s Association of the LDS church. Brigham Young died in the Lion House in 1877.

The homes are located on South Temple Street, one block east of the Salt Lake LDS Temple. Truman O. Angell, Brigham Young’s brother-in-law and architect of the temple, was also architect of both homes, which were built of adobe and sandstone taken from City Creek Canyon. The Beehive House gets its name from the beehive on top of the house. Brigham Young used the beehive to signify industry, and it later became Utah’s state emblem. The Lion House gets its name from a stone lion crouching on top of the front portico. Sculpted by William Ward, the lion was modeled after one which occupied a similar position on a prominent home in Vermont, where Brigham Young was born and raised. 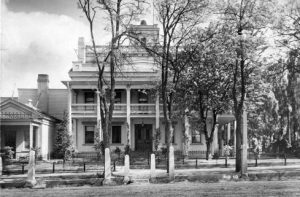 After Brigham Young’s death, the Young family maintained the homes for several years and then sold them to the LDS church. While the Beehive House became the official residence for LDS church presidents, the Lion House became a home economics center for the Latter-day Saint University, which was located on the same block. When the university closed in 1931, both homes were acquired by the Young Women’s Mutual Improvement Association. The Beehive House was used as a dormitory, while the Lion House became a social center for young women of the church. In the Lion House the Young Women’s Mutual Improvement Association held classes in such subjects as art and needlework, listened to lecturers including John A. Widtsoe and Joseph Fielding Smith, and rented the rooms for wedding receptions. 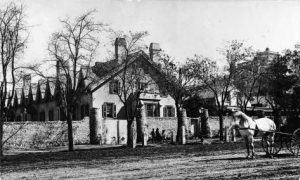