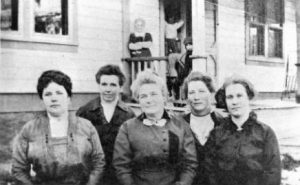 In January 1912 the southern Utah town of Kanab made history when its newly elected mayor and city council took over governance of the small farming community. It was reportedly the first time in the history of the United States that an entire town board, including the mayor, was comprised of women. The board was headed by Mayor Mary W. Howard* and also consisted of four councilwomen: Vinnie Jepson (later replaced by Ada Seegmiller), Tamar Hamblin, Blanche Hamblin, and Luella McAllister. Each of the five women was married and had a family ranging from two to seven children. In addition, three of the five women gave birth during their term in office. Besides assuming responsibility for Kanab’s management, each woman did her own housework, made her own carpets, rugs, and quilts, and attended to her religious duties.

The female board spent an active two years in office, leading some supporters to claim that they had done more for Kanab than all the previous boards combined. Their first official act was to protect local merchants by increasing the license fee for peddlers and traveling salespeople. Other ordinances included the regulation of stray animals, a dog tax, a law requiring residents to use “fly-traps,” and the prohibition of “flippers and slings” within town limits to protect birds from thoughtless youth. The women also outlawed foot races, horse races, ball games, and all “noisy sports” on the Sabbath. And, in keeping with the national trend towards temperance, the female board made Kanab a “dry” community with a strict antiliquor ordinance.

These active women also arranged for the town cemetery to be surveyed and plotted, purchased lumber and had bridges built over town ditches, joined with Kanab’s Irrigation Company and built a large dike to protect the town from flooding, and, finally, appointed September 12, 1912, as “Stink Weed Day” and awarded prizes of $10, $5, and $2.50 for the best clean-up jobs in town.

Toward the end of the board’s term Mayor Howard noted that prior to the women’s election nine-tenths of the townsfolk did not know who the members of the town board were. In contrast, she asserted, even the children know all the names of the female board, and they are discussed “in every home for good or ill.”

As the influential women’s two-year tenure drew to a close, many of their supporters urged them to run again. In response, Howard declared: “We are not at all selfish, and are perfectly willing to share the honors with others. We are in hopes they will elect ladies to fill the vacancies.” This hope was dashed when the Kanab town board returned to male domination in 1914, bringing an end to the history-making female rule.

*”Howard” is a pseudonym for Mary Elizabeth Woolley Chamberlain who used the assumed name to escape polygamous persecution.