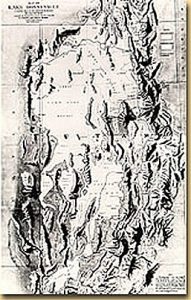 The Great Salt Lake is the latest in a long succession of often more extensive lakes that have occupied the basin of Great Salt Lake over the past several million years. The sediments deposited in the lake and features formed by the waters of these successive lakes provide impressive geologic evidence about the past, and also provide sand and gravel for construction materials, benches and flat spaces for urban development, and scenic horizontal “bathtub rings” along the surrounding foothills. Lake Bonneville, the most recent larger lake, formed the most striking of these beaches, deltas, spits, and wave-cut cliffs that are as high as a thousand feet above the present Great Salt Lake.

Because the basin of Great Salt Lake has no outlet, water leaves only through evaporation. The temperature and the surface area of a closed-basin lake primarily control the amount of water evaporated from the lake. When precipitation is high, more water is added to the lake by direct precipitation on the lake and from rivers and streams flowing into the lake than is evaporated from the lake; the result is that the lake rises and expands across a larger area of the basin. The surface area of the lake continues to increase until the amount of water evaporated equals the total amount of water entering the lake. During the last 10,000 years the level of Great Salt Lake has gone through many cycles but the lake has not risen more than about twenty feet higher than its average historic elevation of 4,202 feet above sea level. When the climate of the region becomes dramatically cooler and wetter, such as during ice ages, the lake in the Great Salt Lake basin rises to much higher levels. One such rise occurred about 140,000 years ago when the lake in the basin rose to an elevation about 700 feet above the current level of Great Salt Lake, and again about 65,000 years ago when the lake rose about half that high. The highest and most recent high lake cycle began about 25,000 years ago and produced Lake Bonneville, a huge lake over 1,000 feet deep that extended over most of northwestern Utah and into Nevada and Idaho.

Explorers as early as Captain J. C. Fremont in 1843 recognized shoreline evidence that a succession of deep lakes had once existed in the Great Salt Lake basin. However, G. K. Gilbert, first with the Wheeler Survey in the 1870s and later with the U.S. Geological Survey, was the first to study these prehistoric lake features and describe the major features of Lake Bonneville. He named the lake after Captain Bonneville, an earlier explorer in the region to the north, but one who never visited Great Salt Lake.

Gilbert established that the lake, with a maximum depth of at least 1,000 feet, covered an area of about 20,000 square miles in what is now northwestern Utah, northeastern Nevada, and southeastern Idaho. He determined that at its highest level, which he named the Bonneville Shoreline, Lake Bonneville overflowed the rim of the Great Basin near Red Rock Pass in southeastern Idaho at an elevation of about 5,100 feet above sea level and spilled into a tributary of the Snake River, eventually flowing into the Pacific Ocean. He concluded that when these waters suddenly breached the relatively unconsolidated sediments forming the pass, they quickly scoured a channel down to the bedrock and released a catastrophic flood down the Snake River. This event, now known as the Bonneville Flood, lowered the outlet elevation and reduced the surface elevation of Lake Bonneville in a short time, probably less than a year, to a more stable level at about 4,750 feet above sea level. Gilbert named this post-flood level the Provo Shoreline.

Gilbert noted that the shorelines which formed when the lake was at the Bonneville and Provo levels are now at considerably higher elevations in the central part of the lake basin than they are around its edges. He correctly concluded that the weight of the water in the deep lake had depressed the earth’s surface when the shorelines were formed. When the water was removed, what geologists call “crustal rebound” elevated the shoreline in the central part of the basin. Gilbert noted that an excess of evaporation over inflow must have drawn the lake down from the Provo Shoreline. His final report on Lake Bonneville was published in 1890 as U.S. Geological Survey Monograph 1. For the next half century very little was added to the understanding of the lake developed by Gilbert.

Since the 1940s, numerous studies using new topographic maps, aerial photographs, new techniques for soil and lake-bed studies, and new techniques for dating sediments and archaeological materials have contributed to a rapidly growing body of information on Great Salt Lake and Lake Bonneville. These studies have confirmed much of Gilbert’s general history of Lake Bonneville. They have also refined the chronology of major deep-lake events and are leading to a better understanding of many of the lower lake stages that postdate Lake Bonneville.

Lake Bonneville’s birth and development were underway about 25,000 years ago. The climate associated with the most recent major ice age filled the lake to approximately 300 feet above the present Great Salt Lake elevation at what is now known as the Stansbury Level. This lake covered approximately 9,300 square miles and its shorelines stand out clearly above the oil refineries near the State Capitol, by the Kennecott Smelter, and immediately east of Wendover.

The lake then resumed its rise until by about 15,000 years ago it reached the lowest pass out of the Bonneville Basin and flowed into the Snake River drainage.

This lake level, the Bonneville Level, was controlled by the height of the pass near Red Rock Pass, at approximately a 5,090-foot elevation. The immense lake, with a surface area of 19,800 square miles, left shoreline traces for over 2,000 miles. Its relatively fresh waters supported a diverse biota including many species of fish. This highest shoreline of Lake Bonneville and its beaches now forms a high bench for residential developments of the Wasatch Front communities. The steeper terrain above this shoreline generally has not been developed. Virtually all of the Wasatch Front area that now is home to most of the residents and industries of Utah was below the waters of Lake Bonneville at this time.

The Bonneville Flood, which occurred about 15,000 years ago, dropped the level of Lake Bonneville more than 300 feet to the Provo Level (4,740 feet above sea level). The 14,400-square-mile lake remained at this level for more than a thousand years, its level controlled by the spillover elevation at Red Rock Pass. It also was relatively fresh. Prominent deltas at the mouths of rivers entering the lake, and shoreline features such as spits, lagoons, and wave-cut benches mark this level. The University of Utah, Brigham Young University, Utah State University, and Weber State University campuses all are located on the Provo Level of Lake Bonneville. Were the lake to rise again in response to dramatically changed climate conditions, it could go no higher than this level because it, too, would flow out of the Great Basin into the Columbia River Basin at Red Rock Pass.

Lake Bonneville is a very young geologic feature, with its age measured in thousands of years rather than in millions or billions of years as are most of the geologic features in Utah. But it is very important. Most of the large deposits of sand and gravel mined along the Wasatch Front were formed by Lake Bonneville. Features formed by the lake provide an excellent laboratory to study how landforms develop beneath the surface of lakes and along lakeshores. The deformation of the lake’s shorelines provides important information about the physical properties of the earth’s crust. The lake’s features provide a striking example of how dramatically changes of climate can affect the surface of the earth in only a few thousand years. The development of another Lake Bonneville would flood most of the thickly populated area of Utah. Fluctuations of Great Salt Lake, which are minor in comparison, can be expected every hundred years or so and can alter the lake level by a few feet to perhaps 4,219 feet above sea level. Yet even this would flood billions of dollars of development along the Great Salt Lake’s shoreline.