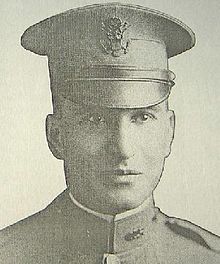 In 1924 he made the first coast-to-coast flight in a day.

“Circling high in the sky above the Golden Gate before making a perfect landing on Crissy field, Lieutenant Russell L. Maughan, tonight brought to a wonderful close his third attempt at spanning the United States by airplane within the limits of dawn and dusk of the same day.” So read a wire service report from San Francisco published in the Salt Lake Tribune on the morning after his spectacular feat.

Maughan had made two attempts to complete this flight in 1923 but was forced to abandon his plans because of mechanical problems with the plane. A year later, at 3:59 a.m., June 23, 1924, when he took off from Mitchell Field in New York in a Curtiss Hawk, success would be his. Many hours later thousands of cheering spectators witnessed his landing in San Francisco at 9:46 p.m.

Maughan’s military superiors felt elated at the success of the flight and the performance of the Curtiss Hawk. Even “Silent Cal,” President Calvin Coolidge, showed enthusiasm for the endeavor by telegraphing this request to authorities in San Francisco: “Please wire me immediately upon Maughan’s arrival. Important here.”

This coast-to-coast flight captured the imagination of the general public as well. As one reporter wrote: ”The significance of this feat can hardly be grasped by the mind when it is remembered that a little over seventy years ago the covered wagon of pioneer days took eleven months to do what the modern airplane accomplished today from dawn to dusk.” Not until Charles A. Lindberg’s New York to Paris flight of May 20-21, 1927, would a man and a flying machine so rivet the attention of the public and the press.

A native of Logan, Utah, Maughan was born on March 28, 1893, to Peter W. and Mary Naef Maughan. In 1917 he graduated from the Utah State Agricultural College and joined the army. As a pilot in World War I he shot down four German planes and received the Distinguished Service Cross for saving the life of another pilot by flying between his crippled aircraft and an attacking German plane.

After the war Maughan married Ila May Fisher in 1919. They were later divorced, and in 1946 he married Lois Roylance. Maughan had four children: Ila May, Mary Ann, Russell Lowell Jr., and Weston Fisher.

A career Army man, Maughan attained the rank of colonel and remained in the service until his retirement in 1946. His cross-country flight of 1924 was not his only record-setting achievement. In 1922 he won the Pulitzer Flying Cup by setting a new world speed record.

From 1930 to 1935 Maughan was Air Advisor to the Governor-General of the Philippines. Shortly before World War II he was sent on a secret mission to Greenland to locate strategic airfield sites that, when war came, proved valuable to the Allies. During the war he commanded one of the first air fighter units to operate out of England against Germany. Later, he was the commanding officer of Air Force bases in Lemoore, California, and Portland, Oregon.

Despite the acclaim showered on Maughan by the nation and his home state, he remained modest about his achievement. “It really wasn’t anything great,” he said. “It was just the result of a lot of experimentation and hard work on the part of many people connected with the air service, and I was fortunate enough to be the one to reap the results of all those years of labor. ” Maybe. But his achievements as a pilot in war and peace demonstrate that Russell Maughan was a man of great dedication and daring.