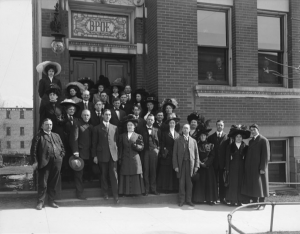 From the 1840s until the turn of the century, blackface minstrelsy was arguably the most popular form of entertainment in America. Traveling minstrel shows made Salt Lake City, Ogden, and other major Utah towns part of their regular circuit, while local residents formed amateur troupes. Minstrel shows, whether featuring whites in blackface or “real” African-Americans, drew large and enthusiastic audiences of blacks and whites in Utah.

The Mormon pioneers valued dramatic entertainment; Brigham Young promoted the establishment of the Salt Lake Theatre in 1862, requesting that only performances of high literary and moral value be presented. From the start, however, minstrel shows were a favorite feature. These shows featured a variety of songs and skits, the most characteristic of which featured an “interlocutor” and two “endmen,” Tambo and Bones, who provided comic commentary on the proceedings. Minstrel performances were highly ritualized and predictable; audiences sometimes knew and called out the punchlines to jokes before the performers did. The songs and skits featured and perpetuated negative stereotypes about African-Americans, slavery, and the south: the lazy, slow-witted, shuffling “Sambo” who longed for the old plantation, and the strutting, razor-wielding, outlandishly dressed, lady-killing “Zip Coon” were common stock characters.

Most of the early troupes which passed through Utah featured white performers in blackface, who generally advertised their shows as “negro” or “Ethiopian.” The first “real” African-American performers (who generally billed themselves as “colored”) to visit Utah were apparently the Original Georgia Minstrels in 1876. In 1868, some local residents formed the “Salt Lake Minstrels” and put on an act of their own. Minstrelsy remained popular through the 1890s; a traveling promoter put together a minstrel show in 1895 which included “60 Salt Lake Society Ladies.” The Utah National Guard formed a blackface troupe as well. The 24th Infantry Regiment, an African-American unit which garrisoned Fort Douglas from 1896 to 1900, performed a benefit show for the Semicentennial Pioneer Day Jubilee in 1897, and later formed a permanent troupe.

Minstrel shows often attracted members of the small African-American local population as performers and audiences. Some Utah African-Americans, however, objected to their content. Julius Taylor, the African-American editor and publisher of the Broad Ax, fumed that “under no consideration would we permit ourselves to witness such degrading and demoralizing performances . . . they are both degenerating and they unmistakably tend to lower every negro in the estimation of the opposite race.”

While the shows often seem insulting to modern audiences as well, minstrelsy held attractions for African-Americans. These performances may have provided Utah blacks with a rare opportunity for local fame, recognition, and demonstration of talent. Within the strict limits of the stereotyped stock characters, minstrelsy offered African-Americans an avenue into show business.