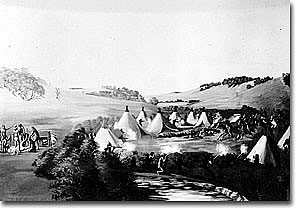 As the Saints colonized and implanted the region with Euro-American social and cultural traditions, they also clashed with the region’s previous residents. The Mormons had not moved to a desert island, and even on their first beachheads in Salt Lake, Davis, and Weber Counties, they ran into Numics who resented their invasion. In 1847, fewer than 20,000 Native Americans lived in Utah. Already, large numbers had died since first contact with whites, principally from disease.

Most of the conflicts raged between the Mormons and the Utes, who ranged southward from the Salt Lake Valley through Pahvant Valley and eastward into the valleys of Sevier and Sanpitch, into the Uinta Basin, and into the San Juan country of southeastern Utah. Some clashes also occurred with the Shoshoni, who claimed Salt Lake Valley but whose homelands extended generally northward into the Weber and Bear River Valleys and into the Snake River Valley of Idaho and western Wyoming. Northern Utah, however, lay on the southern fringes of Shoshoni territory, and the richly endowed lands of Utah Valley held the largest concentration of Utes in the region.

The attitude of the Latter-day Saints toward the Indians represented a convergence of theology, Euro-American imperialism, and racism. Both The Book of Mormon and Joseph Smith had taught that the Indians had descended from Israelite peoples who had migrated to the American continent shortly before the destruction of Jerusalem and the Babylonian captivity. Viewing the Indians as benighted descendants of the original Israelite emigrants, the Mormons believed that they could redeem these Children of Israel, remake them into a “white and delightsome people,” and incorporate them into God’s Latter-day Kingdom. Brigham Young sent out missionaries–in 1854 to New Harmony, south of Cedar City, and in 1855 to Moab, on the Colorado River–to try to convert the Native Americans to Mormonism. He admonished others in close proximity to various tribes to teach them the principles of the gospel and train them in the arts of civilization. The missionaries achieved some success, but often as not, the Native Americans who were converted practiced a syncretic blend of native religion and Mormonism.

Although Mormon theology supported the efforts at conversion, Euro-American attitudes influenced decisively the practical dealings with the Native Americans. As the Mormons came into close contact with Native Americans in western Iowa, eastern Nebraska, and on the trek west, they adopted a cautious approach to trade and association in an attempt to prevent thefts and conflicts. Since the emigrants had trespassed on Native American land and resources, the Indians thought it only fair to exact a tax in cattle, clothing, and other possessions. To minimize such activities, which the Mormons perceived as stealing, Brigham Young, Heber C. Kimball, and other Mormon leaders counseled the people not to invite the Native Americans into their camps and settlements but to trade in the Indian camps to avoid too much familiarity.

Although in Utah, the Mormons urged the federal government to buy the land from the Indians, in practice the Mormons simply moved onto the Numic lands, undermining the Indian economy by depleting streams and lakes of fish and by converting community hunting, gathering, and farmlands into family farms and herd grounds. The Numic peoples responded by taking livestock, food, and clothing, and the settlers retaliated by punishing and killing the Native Americans.