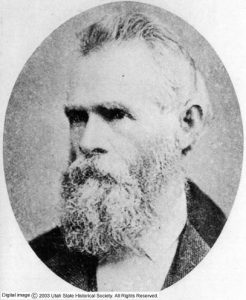 Cane sugar was expensive in territorial Utah because it had to be shipped long distances by sea and railroad. So, many Utahns kept a few hives of bees and traded honey with their neighbors. One beekeeper in Springville was Oliver Boardman Huntington who lived on a small farm where he kept a cow, put up alfalfa hay, planted a garden, and kept bees. He was to help all of Utah produce more sweet honey.

Huntington made his own beehives—wooden boxes with a lid on top that could be removed. Standing upright inside the box were wooden frames that had coarse wire in the center. The bees would use their wax to make honeycombs on the wire frames. He put metal strips on the corners of the frames to keep them from breaking when loaded with honey. At the front of the box near the bottom were holes for the bees to enter the hive. He made his hives so that warm air could easily flow out near the top. On hot days the bees fanned their wings to move the air in the hive and keep the wax honeycombs from melting. These wood hives were easy to open to remove the frames filled with honey.

The German style of beehive used in the 1850s was made of waxed rope. The rope was coiled on the top of the lower layers and waxed in place until a cone-shaped hive was made. The rope beehive is used as the emblem of the Beehive State. When the honey was removed from the rope hive the bees were killed and the rope undone. Then the honeycombs were removed with a hot knife that melted the wax. Wooden box hives with a lid let frames of honeycomb be removed without killing the bees. This way the hive would keep working all summer producing more honey.

As a beekeeper Huntington not only gathered honey but also sold swarms of bees. In 1888 he loaned six swarms of bees to Levi Curtis who kept the hives in Hobble Creek Canyon. After four years Curtis returned six swarms of bees as well as half the honey the swarms had produced. That same spring Christopher Welcock of Price, Carbon County, purchased six swarms of bees that were shipped to him by railroad express. The hives were carefully wrapped in cloth so the bees could not escape during shipment.

Many people kept bees in all parts of the territory. But, all beekeepers had problems with a disease that would kill an entire hive of bees and spread to other hives. Called foul brood, it killed the young bees while they were still in the comb. A beekeeper could stop the disease by waiting until after dark when all the worker bees had returned to the hive and then moving the queen bee and all the workers to a clean hive. If this did not work the infected hives were burned to prevent the disease from spreading. All the beekeepers in the area needed to clean up their hives at the same time or the bees would borrow the disease from nearby hives. When all the bees died in a hive other bees would come to the unguarded hive and take both the honey and the disease back to their own hive.

A beekeepers organization was needed to rid all the hives of the disease. In March 1892 Professor A. J. Cook of Michigan Agricultural College and beekeeper A. T. Root of Medina, Ohio, came to Salt Lake City to help solve the disease problem. They organized for the territory the Utah Bee-Keepers Association. Oliver B. Huntington was named president and R. T. Rhees secretary. The association asked the territorial legislature to pass a bee inspection law in 1892. It allowed each county to hire inspectors to look at all the beehives and destroy those with foul brood disease. After the law was passed and before the 1893 season started, beekeepers were notified of an April association meeting in Salt Lake City. The beekeepers met in the Brick and Stone Masons Hall over the Western Union Telegraph Office on Main Street. Huntington held several sessions of the beekeepers association on April 10 and 11 to tell beekeepers about the new inspection law, how to get rid of the disease, and how to sell their honey.

Huntington was hired during the spring of 1893 as the bee inspector for central Utah County. For two years he inspected every swarm of honey bees in Provo, Springville, Mapleton, and Spanish Fork. He inspected 3,875 hives and destroyed 247 diseased hives. In 1894 he inspected 1,949 swarms, visited 211 owners, and burned 18 hives. Inspection had reduced the disease. In 1896 as bee inspector he took 30 days to inspect 2,970 hives. He earned $60 as inspector and sold bees and honey for $80; his total cash income for the year was $140.

Money was hard to get in Utah, and people often paid their bills with farms goods or credit at a store. Beekeepers in the Springville area were delighted when in 1892 S. T. Fish and Company of Chicago bought honey from them with gold coins. Samuel J. Chapman from Chicago paid for the honey as it was loaded in a railroad boxcar at Springville. Huntington supervised the loading of both extracted honey and comb honey. The boxcar was sent off on November 3 with 22,000 pounds of honey. After the first season of bee inspections the amount of honey shipped from Springville, Provo, Payson, and Benjamin increased. The same company sent a railroad car to Springville on October 5, 1893. Huntington, who had just turned 70 years old, carefully packed the boxcar so the combs would not break. S. T. Fish sold the Utah honey on the Chicago market to people in eastern cities and in Europe. The amount of honey sold in 1893 from just one part of Utah County was 34,000 pounds of which 11,000 pounds was the high-grade comb honey.

Honey was an important business in Utah during the 1890s. Although beet sugar eventually became the major source of sweets, beekeeping has continued as an industry in Utah. Clover honey from Utah is widely known as a favorite honey. And Utah farmers appreciate another vital bee service: as fruit trees and seed crops increase bees are in demand to pollinate the blossoms. It looks as if bees will remain important in the Beehive State.