Miriam B. Murphy
History Blazer, May 1996 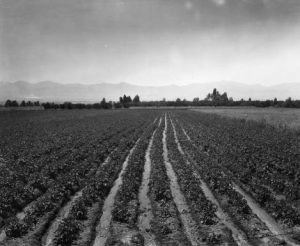 During the spring and summer of 1912 James C. Hogensen toured the state hoping to organize Boys Potato Growing Clubs in every county. This project of the Extension Division of the Utah State Agricultural College (USAC) helped to fulfill a requirement that the division “provide agricultural and home science information to anyone not attending a land-grant institution,” including young people. Hogensen’s trip was a success. He visited 58 schools and talked with 6,786 boys. With the cooperation of local school officials he organized clubs.

A native of Denmark, Hogensen had moved to Cache Valley in 1880 with his Mormon convert parents. He attended schools in Newton and Richmond and later the USAC in Logan, graduating with a degree in commerce in 1899. As a student he had supported himself by working on farms, canals, and railroads. As a schoolteacher in Clarkston he also served as the county fruit tree inspector. In 1902 he began postgraduate studies in soils and horticulture at Michigan Agricultural College and in 1903 joined the U. S. Department of Agriculture in Washington, D. C., in its new soil experiment station program. In 1906 he received a master’s degree in agriculture from Cornell, and by 1907 he had joined the USAC faculty as a professor of agronomy.

Hogensen, who had won renown as a student orator, must have conveyed a great enthusiasm for the potato-growing project to the boys he visited in 1912, for the response was amazing. In Cache County, for example, 10 Potato Clubs with almost 600 members were organized. Box Elder County boasted 9 clubs with some 300 boys. Utah County’s 4 clubs had enrolled 100 boys, while a club in Sanpete County brought 20 boys into the program. These clubs mark the beginning of Utah 4-H.

The goal was ambitious. Historian Daniel A. John said that “each boy pledged to grow a half acre of potatoes under the direction of the Agricultural College . . . accurate records had to be kept. . . . Each member of a local club was allowed to compete with other members for local prizes . . . the winners would advance to the county fair . . . [and then] to the state fair, where four silver cups were awarded.” Winners on the state level would be judged on certified yield (60 percent), best 50 pounds (20 percent), best dozen tubers (10 percent), and for a paper detailing how the crop had been grown (10 percent). Merle Gilbert Hyer, age 16, of Lewiston, Cache County, took the top prize of $100 at the Utah State Fair in 1913.

Hattie Holbrook of Bountiful, Davis County, won the first prize in the home economics division. As state winners she and Hyer also received free trips to Washington, D. C. They were accompanied on the train trip by Hogensen and his wife, Lydia. In Washington the Utah youngsters participated in meetings of the Boys and Girls Agricultural Clubs. Thirty states were represented. Hyer won acclaim for his potato-growing prowess: “He raised 797 bushels of potatoes, although the Utah average was only 190 bushels. He did this without the aid of commercial fertilizers, although he did admit to spreading some of the barnyard variety on his project.”

President Woodrow Wilson had been scheduled to greet the state club winners, but in his stead Mrs. Wilson welcomed them. They lined up by state in alphabetical order, placing the Utahns well back in the line. Hyer remembered “the long, beautiful, white gloves the president’s wife wore. . . . [He] had to stifle a smile upon greeting Mrs. Wilson, since after shaking the hands of fifty or so farm kids, her gloves had turned black.”