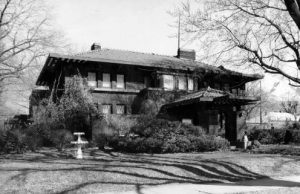 Gustav Lorenz Becker, a leading businessman in the Intermountain West, was a well-known brewer both locally and nationally as well as one of the world’s best trapshooters. The home he built for his family at 2408 Van Buren Avenue in Ogden remains an outstanding example of the Prairie Style in residential architecture in Utah.

Becker was born in Winona, Minnesota, on April 7, 1868. Following graduation from Lambert’s College in his hometown, he entered the business world. The Becker Brewing and Malting Company was begun by William Schellhas, a partner of John S. Becker, Gustav’s father, but in 1890 the senior Becker and his sons Gustav and Alfred moved to Ogden to manage the company. The brewery flourished during its first quarter-century and became one of the most important distributors of beer in the West. During the mid-1910s, however, Prohibition threatened to close the brewery. The resourceful Gustav and Alfred, president and vice-president respectively, changed their production to soft drinks and a nonalcoholic cereal beverage known as Becco. In June 1933 when the consumption of 3.2 beer became legal in the surrounding states (but not yet in Utah) the Beckers were able to secure passage of a state law that permitted the manufacture of beer in Utah for sale in “wet” states on the grounds that it would create jobs for Utahns during the difficult days of the depression.

As a second-generation German American businessman during World War I, Gustav was concerned about potential charges of disloyalty simply because of his ethnic background. In 1918, at the age of 50, he joined the Utah National Guard and worked strenuously to promote the interests of America’s fighting forces. He was one of 12 persons selected to receive the American Legion medal for distinguished service. He was made an honorary life member of the Baker-Merrill Post of the American Legion.

Becker also made his mark as a sportsman. Recognized as one of the world’s best trap-shooters, he won numerous trophies, including the trapshooting handicap championship of America. One of his most publicized stunts was the shooting of clay targets while standing in a motorboat as it skimmed across Pine View Reservoir at speeds approaching 60 miles an hour. Another popular feat was to play “My Old Kentucky Home” using a .22-caliber rifle to hit a chime target built for him by John M. Browning, the world-famous inventor of firearms. “Ogden has the unique distinction,” one newspaper writer observed, “of being the home of two men who became known to all the world for their proficiency with firearms: John M. Browning, who developed them to a point of convenience and accuracy never before deemed possible, and Gus Becker, who demonstrated the art of shooting speedily and surely against all challengers.”

In 1892 Gustav had married Thekla Bohn, another second-generation German from his hometown of Winona. The couple had two daughters. The home the Beckers built in Ogden in the 1910s has an intriguing design history. It appears to have been adapted from Frank Lloyd Wright’s “A Fireproof House for $5,000” published in Ladies Home Journal in April 1907. In plan the Becker home differs from this published Wright design only in the larger amount of space, central fireplace, and decor. The red clay pantile roof and perforated eaves (which serve as trellises) were suggested by Mrs. Becker and offer an interesting contrast to the otherwise pure Wrightian influence. The Salt Lake City architectural firm of Ware and Treganza designed the Becker home following “many strong-willed discussions” with Mrs. Becker and Florence Ware, senior partner Walter E. Ware’s artist daughter. Some have claimed that Eker F. Piers, who designed many Prairie Style homes in the Eccles Subdivision one block from the Becker home, was initially involved in this project as well.

The Beckers chose many expensive details for their home, such as leaded glass windows and fine woodwork, that negated the supposed economy of Wright’s $5,000 model. The dining room with its slightly arched ceiling is the highlight of the interior decorative features. Students of Wright’s work have found many features in this home to compare with homes designed by the great architect.

Gustav Becker died on January 12, 1947. His wife remained in the Van Buren Avenue home until her death in 1958. The Becker home was listed in the National Register of Historic Places some 20 years later. The house was recently rehabilitated and is used as law offices.