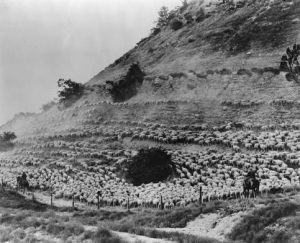 Herd of sheep on their way to the winter range on the desert from the moutains.

During the 1920s Sanpete County’s sheep herds were the largest in Utah, and woolgrowers were the kings of the local economy. Quality as well as quantity brought economic rewards. In 1918 John H. Seely of Mount Pleasant had sold a two-year-old ram for a record $6,200 at the National Ram Sale in Salt Lake City. It was a French Merino type sheep known as Rambouillet, and Seely had introduced the breed to Utah and Sanpete County. 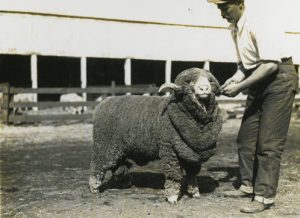 Born in 1855 in San Bernardino, California, Seely moved with his family to Mount Pleasant in 1859 where he grew up on a farm and attended local schools. At age twenty-one he hauled mine timbers in Bingham, but his future lay in stockraising. According to historian John S. H. Smith, Seely managed a cooperative flock and “dramatically improved the quality of the sheep by selective breeding. When he established his own herd in 1888 he continued his interest in improving bloodlines.” He liked the huge French Merino and in the late 1890s “began introducing Rambouillets from California into his breeding program.” The results were so impressive that “he sent his assistant breeder on a buying trip to France and Prussia. By the time of statehood in 1896 Seely had a herd of some 6,000 Rambouillets. He was also known for breeding Durham cattle, Berkshire hogs, Scotch collie dogs, and Plymouth Rock chickens.

By 1920 Utah had the largest number of Rambouillets in the United States and “was the leading source of rams and ewes for flock improvement. . . . their value lay in the large frames which they could impart to the smaller specialized breeds. Fleece yields from their progeny, when bred for wool, were quite exceptional and widely admired for uniformity and a fine, crimpy texture.” Woolgrowers in Sanpete County raised the average weight of a fleece from six pounds in 1900 to ten pounds in 1930. The Rambouillet breed also had the advantage of being relatively docile and adaptable to climatic extremes.

Although a few Sanpete woolgrowers had flocks in the thousands, many families kept small flocks that were part of cooperatively managed herds. Such was the case in Ephraim, a town of some 2,000, where income from sheep amounted to $125,000 one year. Wool prices were good throughout the 1920s, with 1923–25 “especially good years.” Smith reported that wool “prices in Sanpete County were much better than the state averages, which were in turn better than national averages. Utah wool commanded higher prices than wool from surrounding states because Utah fleeces had a shrink factor 10-15 percent less than other fleeces. Sanpete wool was all this and more. Most of the Sanpete sheep were part of the Jericho pool, a marketing arrangement, whose clip set quality standards for the entire United States and always fetched premium prices”—on occasion more than three times the price of other Utah wool. 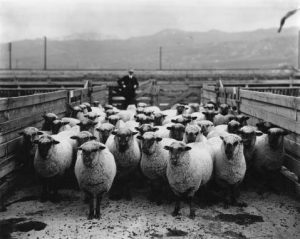 Along with the annual wool clip, Sanpete sheep owners also derived income from breeding stock. After selling to Mormon colonists in Mexico, they began looking farther afield to markets in Australia, South Africa, South America, Japan, and Soviet Russia. In 1921 about fifty yearling Rambouillet ewes were sold at $50 a head to agents of the Japanese Department of Agriculture. Two years later the Japanese bought 160 ewes, and in 1924 a Japanese commissioner visited Sanpete to make additional purchases of Rambouillets. During the 1920s Sanpete stockraisers sent 1,250 head of sheep to Japan and Japanese Manchuria. Smith noted that “The Russians bought Sanpete breeding stock on an even larger scale, but only the purchases from the Seely flocks have been recorded—1,164 in three exportations. Larger numbers of sheep were bought from other breeders in the county. . . . ”

With its high, dry climate, abundance of bunch grass, excellent breeding program, and “near-perfect transhumance cycle,” Sanpete County had proved an ideal place to raise sheep. Unfortunately, the worldwide depression that began in 1929 sent wool prices tumbling. On May 31, 1929, the Manti Messenger had reported that wool was selling at the highest price ever—about a dollar a pound. Then things suddenly changed. Rudolph Hope “related a story of two men who were dickering with a commission man after the peak of the season. Not content with a dollar they were trying for more, but during the bargaining a telegram arrived for the commission man who promptly refused to buy at any price and left. This was the start of the slump and soon wool was fetching as little as five cents a pound, irrespective of quality.” The industry would never fully recover.

At the turn of the century Utah had some 2.7 million sheep, and Sanpete was the heart of sheep country. By 1994 the state had only 445,000 sheep and lambs and a wool clip of only 3.8 million pounds. Sheep remain an important element in the state’s and Sanpete County’s agricultural economy, but the glory days of the 1920s are gone forever.