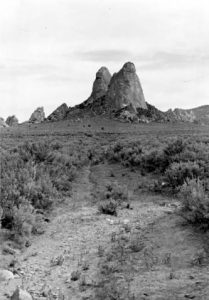 California Trail — Scenery. This is a section of the old trail as it dropped down from the “Gate” at the Twin Sisters as it left the City of Rocks and entered Junction Valley. This valley is the place where the Calif. & Salt Lake trails joined. Photo by: Dave Miller. In U.H.Q. vol.19, p. 255, Digital Image © 2009 Utah State Historical Society.

In the summer of 1848 Samuel J. Hensley made a discovery that greatly affected Utah history: a route from Salt Lake City to the California Trail near the City of Rocks in Idaho that would be followed by thousands of argonauts on their way to California. These gold seekers passing through Utah interacted with the local residents, ending their isolation and bringing changes to the economic and social scene. This gold corridor, which passed through Salt Lake, Davis, Weber, and Box Elder counties was a major road for several years and became known as the Salt Lake Cutoff.

Hensley had gone to California in 1843 but went east to testify at the court-martial of John C. Fremont. Returning to California in 1848, Hensley and the 10 men with him attempted to cross the Salt Lake Desert by way of the Hastings Cutoff. They became mired in mud caused by heavy rain and had to backtrack to Salt Lake City. After replenishing their supplies, Hensley headed north to intersect the California Trail. By so doing, he pioneered a new route that would allow travelers to reach California by going through Salt Lake City where they could reprovision, rest their animals, rest, spend the winter if necessary, and perhaps satisfy their curiosity about the Mormons.

Other men also made important contributions to this route. After 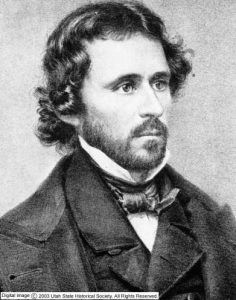 successfully reaching the California Trail, Hensley continued west. On August 27, 1848, on the Humboldt River in Nevada, the Hensley group met some Mormon Battalion veterans under Samuel Thompson, who were making their way to Utah to join their families and church. The veterans had planned to go by way of Fort Hall, but from Hensley they learned of the shorter route north of the Great Salt Lake that would save several days of travel time. Because Thompson’s group had wagons, they would become the ones responsible for changing Hensley’s pack trail into a wagon road. Bidding Hensley farewell, Thompson’s group moved eastward on the California Trail to the City of the Rocks, a major landmark on the trail. Following Hensley’s directions, they found on September 15 the junction to the new road near the rock formation called the Twin Sisters. There the Salt Lake Cutoff diverged from the California Trail. The company traveled east, then southeast into northern Utah and across Deep Creek near Snowville and the Hansel Mountains (commonly thought to be a corruption of Hensley). Just as Hensley had told them, there was plenty of water and grass on the route. With difficulty they crossed the Malad River. The Bear River, the next major landmark, was much easier to ford. South from there they found luxuriant grass for the animals. With the Wasatch Mountains on the east and the Great Salt Lake to the west, the wagons and men passed out of Box Elder County.

On September 25 they reached James Brown’s tiny village of Ogden, formerly Miles Goodyear’s fort, the northernmost settlement in Utah at the time. The few residents charged the veterans a high price for cheese. The practice of charging high prices for supplies to users of the cutoff would become a hallmark of the trail. Here the group split, some proceeding directly to Salt Lake City, the others staying another day to mend broken gear. The party next camped with Hector C. Haight, who was herding cattle near present Farmington. The trail ended in Salt Lake City. The Thompson company had blazed a wagon road that would become extremely important during the next few years. A second group of Mormon Battalion veterans who followed the Salt Lake Cutoff arrived in Salt Lake City some three weeks later. This was the Ebenezer Brown party, which included women and children and families from the ship Brooklyn that had carried Mormons to California in 1846. This second wagon train cut the trail more clearly into northern Utah’s soil.

By mid-June of 1849 the first gold rushers began to arrive in Salt Lake City. Eager as they were to reach the land of golden dreams as fast as possible, many needed to stop briefly in the city for supplies, for repairs, and to rest animals. The forty-niners brought money and goods to the impoverished valley residents. Utahns could charge and receive nearly any price they asked for supplies and services. Many who detoured from the California Trail to Salt Lake City for supplies used the Salt Lake Cutoff to rejoin the California Trail. Word had spread quickly that it was a good road with grass and water at desirable intervals. The bad reputation of the Hastings Cutoff across the Salt Desert kept most from taking that route. Gold seekers who arrived late in the season and did not want to risk the snow in the Sierra Nevada took the southern route through Provo and down the Spanish Trail, but a majority took the Salt Lake Cutoff. Some travelers employed local guides. For example, James C. Sly, who was with the Mormon Battalion group that followed Hensley’s directions in the fall of 1848, led the William G. Johnston party on the Salt Lake Cutoff in 1849. Another group led by William Kelly was close on their heels.

During the early 1850s, when gold fever was still virulent, the Salt Lake Cutoff saw heavy traffic as the major road west from Salt Lake City. An estimated 10,000 to 15,000 California-bound immigrants a year passed through Salt Lake City in 1849 and 1850, and large numbers also journeyed through Utah in 1851-52. Most of them likely took the Salt Lake Cutoff to the California Trail. These thousands of travelers boosted Utah’s economy enormously. As towns sprang up along the agriculturally desirable sections of the road, settlers and immigrants had many occasions for interaction while bartering for farm produce, animals, or repairs and at river crossings, especially where the settlers established ferries. Sometimes immigrants complained of the high prices in the territory, but at least the goods and services were available, making their trip more pleasant. The Salt Lake Cutoff was a boon to traveler and settler alike.