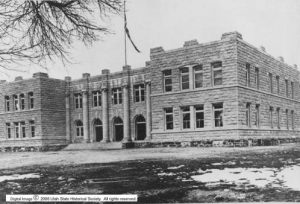 Image shows the Murdock Academy building in 1918. It was built and run by the LDS Church and was at the site of Fort Cameron from 1898-1922. When the Utah counties were required to maintain tuition free high school, the LDS Church abandoned this school.(Fort Cameron, located just east of Beaver City in southwestern Utah, had a life span of eleven years, serving the military from 1872 to 1883.)

In 1883 Fort Cameron, which had been established a short distance from Beaver, Utah, primarily to protect white settlers from Indian raids, was abandoned. John R. Murdock, president of the Beaver LDS Stake, purchased part of the property from the US Army in hopes of locating an academy on the site. According to one account, he was assisted by Philo T. Farnsworth, bishop of the Beaver Ward, Kent Farnsworth, and other local citizens.

The $15,000 purchase price was a bargain, constituting only about one-eighth the value of the land and structures. It was another of the economic windfalls Fort Cameron had brought to the community. For their money the buyers obtained ten acres, eleven substantial stone buildings, a stable, and outbuildings.

These owners held onto the property for fifteen years. They allowed it to be used for summer schools and pleasure excursions while they lobbied Mormon officials in Salt Lake City for a church academy. Such a school was sorely needed–there being no secondary schools south of Provo–so that southern Utah families ambitious for their teenagers to obtain a real education would not have to send them away.

In 1897 the Utah House of Representatives considered a proposal for the state to buy and establish a comprehensive normal school on the Murdock property. Proponents argued that the state owned many buildings in northern Utah but few in the south. But statehood had just been obtained, and others felt Utah’s coffers were too spare to support this $30,000 effort. The measure was defeated.

Thus it was up to Beaver citizens to make a local academy a reality. Among others, Sarah Maeser, member of the local Woman Suffrage Association and wife of the town’s first principal, took up the cause. Her interest no doubt had something to do with her being the mother of Karl G. Maeser, head of Provo’s Brigham Young Academy. Interestingly, men as well as women were affiliated with the local suffrage group, and many of them doubled as academy supporters along with John R. Murdock.

Citizen efforts were effective. In 1898 the Mormon church acquired 240 additional acres from the US government and turned the Fort Cameron site into the Beaver Branch of the Brigham Young Academy. A procession marked the opening of the school, attended by two Mormon general authorities and followed by a public concert and ball. Despite its official name, the school was always known locally as the Murdock Academy after its chief patron.

For ten years the Beaver Stake operated the school, offering high school preparatory classes in addition to ninth and tenth grade courses. In 1908 the LDS church headquarters assumed total control over Beaver Academy and introduced a full high school curriculum. How important LDS leaders considered the education of their youth is indicated by the addition of a $100,000 classroom building to the campus in 1908.

Finally catching on to the need for public education beyond grade school, the state legislature in 1922 passed a law requiring all Utah counties to maintain tuition-free high schools. After 25 years, Beaver Academy was closed. Much of the land was sold and the equipment donated to the new Beaver High School.

From 1937 to 1938 Fort Cameron once again housed young men from all over the country, this time assigned to the Milford Civilian Conservation Corps. The CCC dismantled the remaining buildings. The stone was used for a new Milford chapel and the Minersville town hall.

Today only the laundress quarters remain. Old Fort Cameron was recently surveyed for possible listing in the National Register of Historic Places.