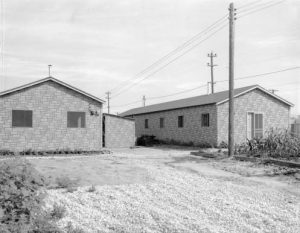 In September 1942 we were shipped by train to a concentration camp which we knew to be somewhere in Utah and was called Topaz.

There were no trees, or growth of any kind, except clumps of dry greasewood. We were entering the Sevier Desert some fifteen miles west of Delta, and the surroundings were now as bleak as a bleached bone. As the bus drew up to one of the barracks, we heard the unlikely sound of band music. Marching toward us down the industry road was a group of young Boy Scouts who had come with the advance contingent, playing bugles, trumpets, and drums and carrying signs that read, “Welcome to Topaz—Your Camp.” It was a touching sight to see them standing in the burning sun, covered with dust and making such a determined effort to lessen the shock of our arrival at this bleak desert camp.

We found that our [barracks] room contained nothing but four army cots without mattresses . . . Those who arrived still later did not even have barracks to go to and were simply assigned to cots set up in empty mess halls, laundries, or the corridors of the hospital.

As the mornings and nights grew colder, we looked with increased longing at the black iron stove that stood uselessly outside our barracks waiting for work crews to bring it inside and connect it. One day, almost a month after our arrival, a work crew composed of resident men appeared and finally installed our stove. . . .

By now my father, sensing the tremendous needs of the struggling community, had volunteered to serve on several committees. My mother, in her own gentle and quiet way, continued to be a loving focal point for our family, converting our dreary barracks room into a makeshift home, where we invited our friends as we did back in Berkeley. Having been a close family, ours did not disintegrate, as many did, from the pressures created when entire families were confined to living in a single room.

I applied to work in the Topaz elementary school system [and] earned a salary of $19 a month for the forty-hour week.

[One day] about noon, gray-brown clouds began massing in the sky, and a hot sultry wind seemed an ominous portent of coming storm. Before I was halfway to school the wind grew so intense I felt as though I were caught in a hurricane of dust. Barracks only a few feet away were soon completely obscured by walls of dust, and I was fearful that the wind might sweep me off my feet. I stopped every few yards to lean against a barracks and catch my breath and then plodded on to school. When I got there, I found that many of the children had braved the storm to come to school. It touched me deeply to see the eagerness of the children to learn despite the desolation of their surroundings and the meager tools for learning. At the time they seemed to adapt with equanimity and cheerfulness to this total and bewildering upheaval of their young lives.

I tried to conduct class, but dust poured into the room from all sides as well as from the hole in the roof, which still lacked a chimney. It soon became obvious that we could not continue classes, and it seemed prudent to send the children home before the storm grew worse and stranded us all at school. That night the wind reached such terrible force I was sure our barracks would be blown apart. For hours the wind shrieked around us like a howling animal, rattling and shaking our flimsy barracks. The following day, the non-Japanese head of elementary schools reprimanded the teachers of Block 41 for having dismissed school without consulting him.

A succession of dust storms, rainsqualls, and a full-fledged snowstorm finally brought our limping schools to a complete halt in mid-November. Snow blew in from the holes that still remained in our roof, and we all shivered in ten-degree temperatures even though we wore coats, scarves, and boots. An official notice finally appeared stating that schools would close and not reopen until they were fully winterized with sheetrock walls and stoves. It seemed close to miraculous that we had been able to hold any kind of school for as long as we had, and I knew it was possible only because the children had been so eager to come and the residents so anxious to have some semblance of order in their lives.