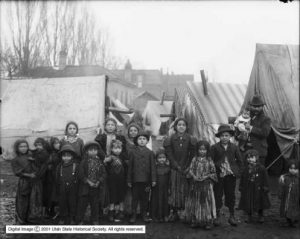 To most residents of rural Utah in the early 1900s summertime meant hauling hay, digging ditches, irrigating crops, and tending livestock. Other than the usual dances and town parties there was little diversion from the monotony of farm labor—that is until traveling bands of Gypsies began making appearances and causing stirs of excitement. In Deseret, Elsinore, Oak City, Kanab, and other remote communities news of these exotic visitors would spread quickly. Most of the Gypsies were of Balkan, Eastern, and Central European descent and had come to America at the turn of the century. Their nomadic lifestyle took them from ranch house to farm village where they would entertain, beg, and reportedly even steal to survive.

The men in their big hats and spangled vests and the women in full skirts, black braided hair, bright scarves, necklaces made of coins, and large earrings would lead their caravan of wagons, horses, dogs, and children through town. They often entertained the townsfolk with trained animals. In Manti, Sanpete County, one resident remembered a band of Gypsies that owned a large black bear that danced; this group also had a monkey, perched atop an organ grinder, that caught all the nickels thrown to him. In Oak City, Millard County, a Gypsy singer entertained town residents for hours at the city hall with his extensive repertoire. In Elsinore, Sevier County, another Gypsy performed rope tricks; an hour-long demonstration of his skill was a highlight of the town’s Fourth of July celebration.

In addition to showcasing their various talents, the Gypsies employed other methods to earn a living. Gypsy women would often tell fortunes for fifty cents, many of the men were ardent horse traders, and there are also stories of persistent Gypsy begging. Burt Hales told of the family garden in Oak City from which his father peddled produce to help support the family. One day after his father had given the Gypsies some vegetables, one lady was not satisfied and returned to get more. Hales’s explained that he had given all he could and needed the rest for his customers. When the woman persisted and started into the garden, Hales’s father had to call the family dog to induce her to leave.

The Gypsies generally traveled in groups of five to ten families and camped in vacant lots on the outskirts of town. They would stay a few weeks to a month before moving on to other communities. In the end, industrialization, the coming of the automobile, and the Great Depression all combined to bring an end to the Gypsies’ way of life. In order to obtain government relief many were forced into a sedentary urban lifestyle, and their nomadic wanderings largely vanished. Regardless, memories of the entertainment and adventure that the Gypsies seemed to create linger among older residents of several rural Utah communities.