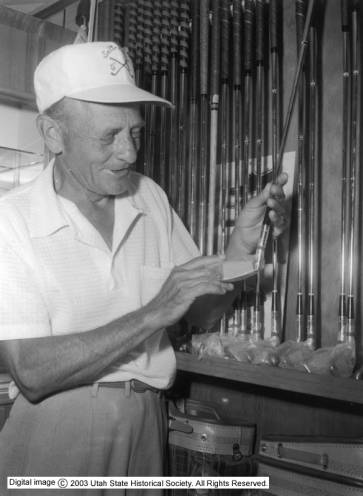 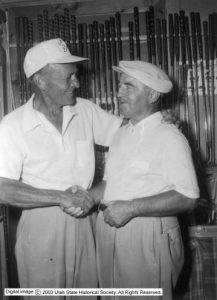 George Von Elm (left) was a Utah golfer famous for defeating the legendary Bobby Jones in 1926. Joseph Michael (Mick) Riley (right) was one of Utah’s most prominent golf figures in the early years of Utah golf.

He was the Utah golfer who defeated the great Bobby Jones.

George (Gix) Von Elm was one of Utah’s greatest amateur golfers and in the early 1960s was named Utah Golfer of the Century.

Gix was born in Salt Lake City on March 20, 1901, to Jacob H. and Marie Demmer Von Elm. He attended West High where he was an outstanding athlete. While a senior at West he won the first of many golf tournaments, the Utah Amateur.

Von Elm began his golf career as a caddy on the old Salt Lake Country Club course. His golf skills developed quickly, and soon he was seeking competition outside the state. In 1919 he won the Pacific Northwest Championship in a final round that pitted the young Utahn against veteran Chandler Egan in what was described by the Salt Lake Tribune as “one of the most sensational matches in the history of northwest golf.” He repeated as winner of that tournament the following year and also captured the Transmississippi Amateur title. 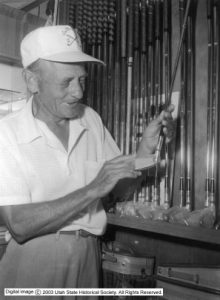 Bobby Jones. Von Elm’s duels with Jones became legendary. In 1924 Gix surprised the top golfers by finishing the U.S. Amateur as runner-up to Jones. The following year Jones eliminated Gix in the semifinals. But Von Elm persisted and in 1926 succeeded in defeating Jones—who had already won the British Open and the U.S. Open that year—to collect the U.S. Amateur title in September at Short Hills, New Jersey. A record-breaking crowd of 10,000 erupted with cheers as, in the words of an Associated Press reporter, “The monarch of golf was toppled from his amateur throne…by flaxen-haired George Von Elm…in one of the most stunning upsets of links history.” The win capped a superb golf year for Von Elm. Earlier he had played a key role in the American defeat of the British in Walker Cup competition and had tied for third in the British Open with the famous professional Walter Hagen.

In the 1930s Von Elm turned professional and made a career out of his athletic prowess. As a pro he played out of Los Angeles and Hollywood and won some big money tournaments.

From 1957 to 1960 Gix was the professional at the Blackfoot, Idaho, golf course. Later he moved to Pocatello where he directed the designing and construction of golf courses in suburban Alameda and at the Sun Valley resort.

Von Elm was married twice, first to Marcella Rodgers and after her death to Billie Dunn. He died in Pocatello on May 1, 1961.