The old ways of life died hard. But gradually, in the period between statehood and World War I, Utah adjusted its economic, social, and political life to that of mainstream America.

State government and the codification of Utah law began, and the State Capitol was built. Conservation and reclamation projects were instituted. National parks, monuments, and forests were set aside by the federal government.

Urbanization continued, until by 1920 nearly half of the population lived along the Wasatch Front. The percentage of Mormons in the total population declined to 68 percent as the state grew. The development of mining and heavy industry drew an influx of various ethnic groups such as Greeks, Japanese, Hispanics, African Americans, and others, and ultimately diversified the social and cultural life of the state, especially in Carbon, Juab, Salt Lake, Tooele, and Weber counties.

Less than a third of the people were engaged in agriculture and related occupations, although farm acreage had more than doubled. Utah continued to pioneer in dry-farming techniques, while irrigation opened up other farmlands to fruitful use. Sheep and cattle competed for range lands, and the railroad centers at Ogden and Salt Lake City boosted the livestock processing industry. 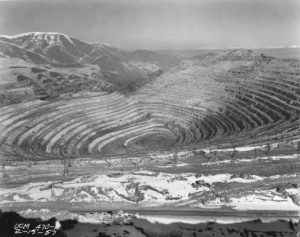 A fortune in silver had been taken from the Utah mines in the nineteenth century, but in the early twentieth century the big story was the development of the copper industry at Bingham Canyon under Daniel C. Jackling who made the open pit mining of low-grade ore profitable. Coal mining increased in profitability with the coming of the railroad to coal regions. Mine owners built a number of company towns in Carbon County for the coal workers, many of whom were recent immigrants. 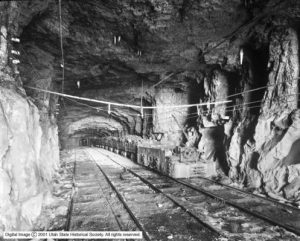 With industrialization came conflict between labor and management particularly in the mines. At Scofield in 1900, 200 men were killed by an explosion in the Winter Quarters Mine. This major catastrophe signaled the end of an era. Never again would miners be quite so willing to endure dangerous working conditions for so little personal gain. Important legislation was passed by the state to benefit laborers. Strikes and militant unions emerged as economic forces to be dealt with. The legendary IWW worker and songwriter Joe Hill was executed in Utah in 1915 for the murder of a Salt Lake City grocer and his son, a case that aroused national and international controversy.

Modern cities emerged as electricity, telephones, and automobiles changed forever pioneer lifestyles. The building of palatial homes, business blocks, power plants, interurban railroads, highways and secondary roads, and housing for average citizens contributed to city development. Population continued to grow and to concentrate along the Wasatch Front in Weber, Davis, Salt Lake, and Utah counties, a trend that continues to the present and profoundly affects the state’s political, social, economic, and cultural life.

In 1905 the opening of large portions of the Uintah Indian Reservation to white settlement led to the founding of more than a dozen towns in the Uinta Basin. Resentful Utes reacted to this betrayal by attempting an alliance with Sioux Indians. Their trek to South Dakota in 1906–1908 ended in failure and a deep sense of loss. In San Juan County Indian and white confrontation primarily over grazing rights on public lands led eventually to the so-called Posey War of 1923. Concession was made to Indian grazing rights, and thereafter the “Indian problem” lay quietly buried on the reservation until mid century. Politically aware and adept at exercising their legal rights, Utah’s Indian peoples have successfully fought for greater control of tribal lands and resources and management of their own affairs in recent years.