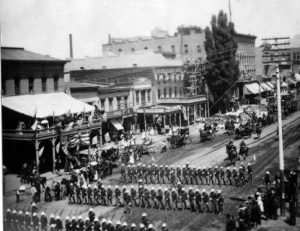 In October 1896 Salt Lake City experienced a small but important change in the racial makeup of its population. The arrival of the U.S. Army’s 24th Infantry Regiment at Fort Douglas brought approximately 600 African American men, women, and children to the city. Only four African American units existed in the U.S. Army; they were composed of white officers and black enlisted men. Fort Duchesne in eastern Utah was garrisoned by the black 9th Cavalry from 1886 to 1900, but those troops were seldom seen in Salt Lake, while the 24th would be highly visible. The soldiers, their families, and others associated with the regiment roughly quadrupled Salt Lake City’s existing black population.

American society was highly polarized by race in the 1890s, and Utah was no exception. Most African Americans still lived in the former slave states of the South, where they experienced severe restrictions on their social and legal rights, including frequent violence. Salt Lake City’s small African American community did not experience much outright violence, but Utah’s white population generally considered blacks second-class citizens. Minstrel shows, jokes, advertisements, and police behavior toward blacks demonstrated this attitude and reinforced negative racial stereotypes.

Black Army units usually served in remote areas (like Fort Duchesne, which Ninth Cavalrymen called the “American Siberia”). The 24th’s assignment to pleasant, urban Fort Douglas was meant as a reward for its years on the frontier. The move was opposed by some of the city’s white citizens. The Salt Lake Tribune suggested that drunken black soldiers might accost “the best people of the city” while traveling on streetcars. U.S. Senator Frank Cannon even met with the Secretary of War about the regiment’s assignment but was unable to convince him to transfer the unit elsewhere.

Others, though, defended the 24th. A Captain Hoffman, a retired infantryman, claimed that the black soldiers were as good as any in the service and as well behaved. Julius Taylor, the African American publisher and editor of the Broad Ax, a weekly Salt Lake newspaper, supported the move. The soldiers themselves were aware of the opposition; and one of them, Private Thomas A. Ernest, wrote a letter of rebuttal to the Tribune’s editorial. In it he noted that the men had “enlisted to uphold the honor and dignity of their country as their fathers enlisted to found and preserve it.” Moreover, he asserted, the troops “object to being classed as lawless barbarians. We were men before we were soldiers….We ask the people of Salt Lake to treat us as such.”

The 24th’s soldiers quickly proved their supporters correct. They joined existing fraternal organizations or formed their own. Their chaplain, Allen Allensworth, one of only two African American chaplains in the Army, became a favorite speaker at local churches and social events. The unit’s regimental band and baseball teams drew enthusiastic crowds.

The 24th’s deployment was not free from those problems—such as alcohol and gambling—commonly associated with military camps. One year after the soldiers’ arrival, however, the Tribune acknowledged the men’s general good behavior and professionalism. By their actions these African American soldiers gained a measure of respect and admiration from the larger white society that was generally denied to black civilians.

When the regiment was ordered to Cuba and the Philippines during the Spanish-American War, local residents, both black and white, saw them off at the railroad station and welcomed them back to the city at the end of their tour of duty abroad. Several members of the 24th liked Salt Lake City well enough to make it their permanent home.