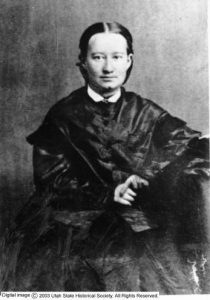 Rural family life in 19th-century Utah often required family members to share daily responsibilities. Frequently wives shouldered heavy domestic burdens as well as helped with farming and other tasks. Even for two-parent families, providing adequate clothing and food was often very difficult and required stamina and perseverance. For those parents who faced the frontier alone the difficulties must have seemed insurmountable; perhaps for their simple survival they deserve recognition and praise. Alice Parker Isom, a pioneer of the small southwestern Utah village of Virgin City, is one such heroine. Left a widow one month before turning 38, she tackled the daunting task of raising a large family alone. Using her keen business skills, she managed a highly successful cooperative store and in the process provided a comfortable home life for her children. Her remarkable story stands as an example of the tenacity that tamed the Utah frontier.

Alice was born January 8, 1848, in St. Louis, Missouri, to John and Ellen Briggs Parker, converts to the Mormon faith from England. In 1852 the Parkers moved west to Salt Lake City until “called” to grow cotton in Utah’s “Dixie.” The family settled on the banks of the Virgin River in 1862 at the town of Virgin City and spent their first winter living in a wagon box. Alice thought her new home “a dreadful place,” and it took “years” before she felt content there. Nonetheless, she set about helping her family establish a home. Before long her father had “taken up land, put in a crop and set out a orchard,” and Alice had learned to card and spin cotton.

In the summer of 1869, following a four-year courtship, Alice married her sweetheart, George Isom, in Salt Lake City. The young couple returned to Virgin City with $1,000 worth of merchandise that Alice’s father used to open a Co-op store in the boarded-up back porch of his home. Local residents eagerly shopped at the new store; it did a brisk $100 worth of business on opening day. From the outset George meticulously kept the Co-op’s books, and by 1880 Alice’s father had turned the entire business over to him to manage. George soon constructed a new building near his house so Alice could care for their children while clerking. They received 6 percent of the sales in exchange for providing the building and operating the store. By 1885 they were blessed with eight children for which George provided “a very comfortable home” and “always avoided debt.”

The young couple still faced challenges, however. In 1875 doctors were forced to remove Alice’s right eye in order to cut out a large fibrous tumor that had grown behind it. But this trial must have seemed mild compared to those she encountered ten years later. In December 1885 she experienced her “first great sorrow” when her youngest daughter, Josephine, died. Fortunately, George was there to comfort her, but less than two months later she “had a greater sorrow to bear alone”: George, at age 39, died of “consumption.” Two weeks later Alice gave birth to another girl, making a total of eight children left to her care. Her difficulties did not end there. Alice’s father died three month’s after George’s death, and then, less than two years later, her mother also passed away.

Deeply saddened but undaunted by these personal tragedies, Alice became manager of the Co-op store and under her leadership it flourished: “I had done most of the buying from the first and understood the business quite well. I did well with it both for myself and the stockholders.” Her children helped her. Ellen, 15 when her father died, assumed many of his old responsibilities. She clerked at the store, “tended the horses, cows, and pigs, took her father’s place at the table, and did everything…to lighten [her mother’s] burdens.” Still there were times, like the Christmas of 1887 when all eight children had the measles, that Alice had to cope on her own. Regardless, she always seemed to manage and ultimately provided the best possible opportunities for her children.

Under her direction the Virgin City Co-op continued to thrive, so much so that by the fall of 1894 some of the stockholders had become “jealous,” thinking that Alice “was doing too well.” Some agitated for her replacement and argued that a new store should be built. The schism that developed among the stockholders left Alice “very much grieved” as the store “was the only way that [she] could see to provide for [her] family.” Eventually, “about half” the stockholders withdrew and started a store of their own, which, according to Alice, “never paid a dividend” and “died seventeen hundred dollars in debt.”

Alice saw this upheaval as a prime opportunity to leave Virgin City and move where her children could obtain a good education. She reduced the stock in what remained of her store and left Mary, her recently married daughter, in charge. She moved to Provo for three years and enrolled her children in the Brigham Young Academy, taking in boarders to pay expenses.

When she returned to Virgin City in 1898, debt free and her children better educated, townsfolk urged her to revitalize her store; she did and soon “had a nice business again.” When oil was discovered near Virgin in 1907 store sales boomed. She also opened her house to boarders, taking in hundreds of oil men over the next year. Then she purchased a sawmill and leased it to experienced operators. With over 500 oil men depending on her for supplies, she stocked the shelves for the fall and winter and stood to turn a huge profit. It all seemed too good to be true–and it was. The Panic of 1907 devastated the national economy, and the oil boom went bust, leaving Alice $5,000 in debt. She patiently collected from townsfolk who owed her money, but not until 1922 was she debt free. 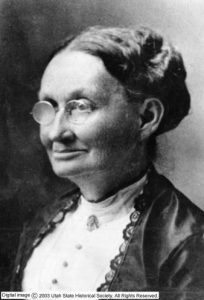 Alice spent the last years of her life near her family, most of whom had established homes in the newly founded community of Hurricane about 10 miles west of Virgin City. She lived in “a neat little house” constructed for herself and soon became involved in community and church activities. She died there on August 6, 1924.