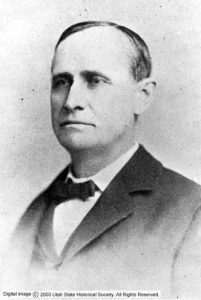 On December 13, 1906, Arthur Brown, one of the first two U.S. senators elected after Utah gained statehood, died in the Emergency Hospital in Washington, D.C., from complications following a gunshot wound. He had been shot on December 8 by Anne Maddison Bradley, his mistress of several years, after a turbulent and well-publicized love affair. Residents of Salt Lake City were “shocked but not surprised by the news.” His death concluded a sordid episode in Utah’s history much written about at the time.

Arthur Brown was born March 8, 1843, on a farm near Schoolcraft, Michigan. When he was 13 the family moved to Yellow Springs, Ohio, where he attended Antioch College, graduating in 1862. Two years later he obtained a law degree from the University of Michigan at Ann Arbor. He practiced law in Kalamazoo, building a large and lucrative practice, and married a woman later known only as Mrs. L. C. Brown, and they had one child, Alice. He became enamored with Isabel Cameron, the daughter of a Michigan state senator. The affair became public knowledge, and Brown and his first wife separated. He moved to Salt Lake City in 1879 in the hope of being appointed U.S. district attorney for Utah. Failing to do so, he set up a private law practice. Isabel Cameron followed him to Utah, and they were married after his divorce and had one son, Max.

As a successful attorney, close to forty, Brown had apparently settled down to respectable family life. He rose in the Republican party ranks, and in 1896 the predominantly Republican Legislature elected him and Frank J. Cannon as Utah’s first U.S. senators—the great political prize of statehood and an office sought by several prominent men. Brown drew the short term, serving in the Senate until March 4, 1897. Through his work in the Republican party Brown had become acquainted with Anne Bradley in 1892. By the time of his election in 1896 the 53-year-old-senator and the 23-year-old Bradley were close friends.

Anne Bradley was born January 7, 1873, in Kansas City, Missouri. She moved with her family to Utah in 1890 and worked as a clerk in the Salt Lake Water Works Department, quitting a week before her marriage on September 20, 1893, to Clarence A. Bradley who worked for the Rio Grande Western Railroad. They had two children, Matthew and Martha Clare. Anne appears to have been a young woman with a wide range of interests. She belonged to the Salt Lake City Woman’s Club, the Utah Woman’s Press Club, and the Poets’ Roundtable. She was also, for a time, editor of the Utah State Federation of Women’s Clubs’ publication. In 1900 she served as secretary of the fifth ward Republican Committee and as secretary of the State Republican Committee in 1902. Local records reveal that she was a charter member of the First Unitarian Church in Salt Lake City.

According to her testimony at her trial, she stopped living with her husband in 1898 and after first spurning Brown’s advances discovered that she loved him: “…Finally, he began coming to my house at very unseemly hours, and I told him it must stop, but he answered. ‘Darling, we will go through life together. I want you to have a son’ and after several months we did.” Brown assured her that he was taking the necessary steps to get a divorce and that the only problem was the property settlement. She said that he gave her an engagement ring. They took a trip to Washington, D.C., accompanied by his daughter Alice. On this trip, Bradley said, she traveled as Brown’s wife.

Brown had separated from his second wife and was living in the Independence Block in 1902. Isabel Brown and District Attorney Dennis C. Eichnor hired private detective Samuel Dowse to follow Brown and Bradley, and on September 28, 1902, both were arrested on charges of adultery. Mrs. Brown allegedly lodged the adultery complaint because Arthur had begun divorce proceedings against her. She was against the divorce as “…she intended to be presented at court in England next year and, as divorced women are restricted from that court, she…[objected] seriously to being divorced at all.” She offered to withdraw the charges against Brown and Bradley if he would drop the divorce. In January 1903 Brown and Bradley were once more arrested on adultery charges. According to Soren X. Christensen, a lawyer, Arthur and Isabel Brown had attempted to make a financial settlement with Anne Bradley that included a home and $100 a month for her and her children, but she rejected the offer, saying that “she wanted nothing but the Senator.” The illicit affair continued with all parties involved in a dramatic confrontation in a Pocatello, Idaho, hotel where Isabel Brown, according to Christensen, threatened to kill Bradley and intimidated Arthur by ordering him to open the door to his hotel room or she would “mash it in.” The former senator did. The combatants spent the night accusing each other of all sorts of indiscretions, and Brown, according to Christensen, gave Bradley a revolver as protection against his wife.

Bradley apparently believed matters had been settled. Brown would make a financial settlement with his wife, secure a divorce, and marry her. When Bradley returned to Salt Lake, however, she found the couple had reconciled. She was three months pregnant with a second child she claimed Brown had fathered. Brown promised to arrange matters to give Bradley and her children “the protection…necessary.” When Isabel Brown died of cancer on August 22, 1905, a solution seemed at hand. Bradley obtained her divorce and expected a quick marriage to Arthur, but he was in no hurry to gain legal access to what he had enjoyed illicitly, postponing wedding dates and evading all attempts to pin him down about marriage or his promise to set her up in business.

In December 1906 she followed Brown to Washington, D.C., where she found letters to him from Annie Adams Kiskadden, mother of the famous actress Maude Adams and an actress in her own right. Enraged by the letters and believing Brown and Kiskadden planned to marry soon, Anne Bradley confronted Brown in his hotel room and shot him.

At her trial Bradley claimed temporary insanity. Orlando W. Powers, a prominent Utah attorney and former judge in Ogden, and a young Washington lawyer defended her. Brown’s will renouncing Bradley and the two sons she claimed he had fathered swayed public opinion against him. The jury acquitted Bradley. She returned to Utah, working at various jobs before opening an antique store in Salt Lake City that she operated until her death at age 77 on November 11, 1950.