From its rudimentary beginnings as a university dance school, Ballet West has grown into one of the world’s leading regional ballet companies. The dance company’s foundation is the result of the drive, expertise, and vision of Willam F. Christensen, who returned to his native Utah in 1949 to choreograph the summer festival productions held in the stadium of the University of Utah. Christensen was already a recognized pioneer in the world of dance, having co-founded the San Francisco Ballet Company. After two more successful summer seasons, University of Utah President A. Ray Olpin offered Christensen the position of professor of ballet, with the charge to begin a ballet school under the aegis of the Department of Theatre and Speech. The result, the University Theatre Ballet, created in 1952, gave students the opportunity to perform for the community. The ballet school became the first to be established at an American university, setting a pattern for other institutions to follow. Only three years after its creation, the University Theatre Ballet and the Utah Symphony combined talents in 1955 to present The Nutcracker. The ballet continues to be a cherished Utah Christmas tradition. 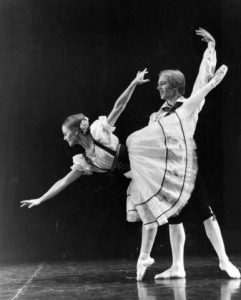 As the scope and abilities of the Utah Theatre Ballet grew, so did its aspirations. In 1963, Willam Christensen and Glenn Walker Wallace successfully applied for a Ford Foundation grant of $175,000 to establish the Utah Civic Ballet. As the successor to the University Theatre Ballet, and the first fully professional ballet company in the Intermountain West, the new company toured the region for the next several years and gained a strong following in Utah’s surrounding states. The Federation of Rocky Mountain States selected the Utah Civic Ballet as its official ballet company in 1968. The name “Ballet West” was chosen to reflect the regional status of the company.

Under the artistic direction of Willam Christensen, Ballet West developed in quality and prominence. Its rigorous touring schedule and local performance seasons proved the company to be a major asset to Utah. A summer residency program at Aspen, Colorado was begun in 1970. This program still offers student instruction during the day and professional performances at night. In 1971 the company enjoyed great success on the first of several European tours. By the early 1970s Ballet West was nationally recognized as one of the most active ballet organizations in the country.

Bruce Marks became co-artistic director of the company in 1976, bringing his experience as an internationally acclaimed dancer and choreographer to this new role. When Christensen retired in 1978, Marks assumed full directorship. Willam Christensen had forged Ballet West into an exceptional classical ballet organization; under Marks’ direction, the company broadened its repertoire to include new and innovative works, some of which were world premiere performances. The company continued to tour extensively and firmly established its reputation as a true classical ballet company with its performances of Sleeping Beauty and the recreated Abdallah at the Kennedy Center for the Performing Arts in Washington, D.C.

In 1985 Ballet West welcomed John Hart as its new artistic director. Heralded as one of England’s most distinguished dancers and ballet masters, Hart brought a new dimension of excellence and professional growth to the company. Under his direction, Ballet West has matured and achieved higher levels of artistic development.

While preserving its regional heritage, Ballet West has transcended its regional beginnings and is considered one of the country’s finest ballet companies. The forty-member company is known for its strong ensemble, energetic young dancers, and diversity of performance styles. The organization is respected for its ability to perform such demanding classics as Swan Lake while also being applauded for its presentation of many original works. This creativity and dedication to professional excellence continue to nourish the pioneering spirit that is the hallmark of Ballet West .