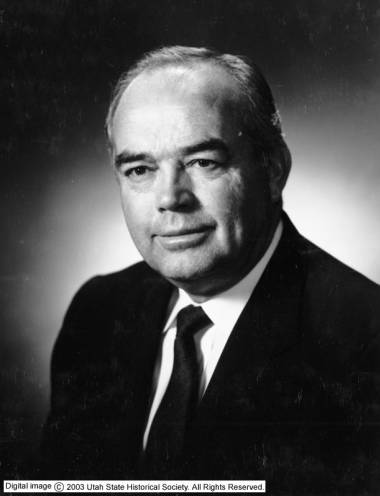 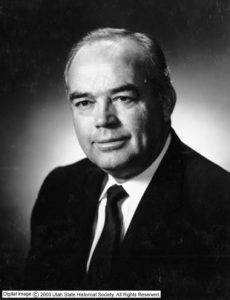 Norman Bangerter was born in Granger, Utah, on 4 January 1933 to William H. Bangerter, a building contractor and farmer, and Isabelle Bawden Bangerter. He was the tenth of eleven children. In 1953 he married Colleen Monson of Magna, and the couple had six children of their own while also raising a foster son.

At the age of thirty, Bangerter founded his own construction company, which specialized in home building and residential real estate development. He developed the company into a very successful enterprise which did especially well during the economic boom of the 1970s.

It was only after his business was firmly established that Norm Bangerter became interested in politics. He served in the state house of representatives from 1975 to 1985; and held leadership positions of Assistant Majority Whip, Majority Leader, and Speaker of the House. In 1984, the popular speaker became the Republican candidate for governor. He defeated Democratic candidate Wayne Owens by a margin of 56 to 44 percent.

The decade of the 1980s was a period of great economic instability and demographic change, bringing tremendous challenges to Governor Bangerter. Within a year of entering office, Bangerter had to address the problem of the rising Great Salt Lake, the result of several consecutive years of heavy rainfall. He built a large pump station that pumped the water onto the west desert. The $60 million project reduced the level of the lake and helped protect the state’s vital interstate highway systems, the airport, and municipal waste water treatment plants while providing a sense of security to several large lake businesses for the future. Decreased rainfall in the following years, however, left many Utah taxpayers feeling that the money for the pumps had been ill-spent.

In 1986-87, Utah experienced a serious regional recession brought on by declining energy commodity prices. Mining employment fell by 60 percent and construction by 30 percent. Two major companies—Geneva Steel and Kennecott Copper—closed temporarily. Adding to this fiscal challenge was the state’s exploding public school enrollments, brought on by the significant immigration and high birth rate of the 1970s. With state revenues declining and school enrollments increasing faster than anywhere else in the nation, Bangerter was forced to raise taxes. This spawned a tax protest movement. Three initiatives were placed on the ballot by the tax protesters. Despite all the attention the movement received, the three initiatives were defeated by a large margin in the November 1988 election. Bangerter also faced the collapse of five thrift institutions in the state when their private insurer defaulted. These five institutions were taken over by the state. After a lengthy negotiation process with the depositors, insurance companies, and the legislature, the depositors were able to get money back. In the 1988 election former Salt Lake Mayor and Democrat Ten Wilson challenged Bangerter. Republican Merrill Cook broke with his party and ran as an independent candidate. In one of the great political election comebacks in state history, Bangerter won the election. The governor received 40 percent of the vote, Wilson received 39 percent, and Cook 21 percent. During his administration, Bangerter focused on three key issues. His foremost interest was improving the state’s educational system. He significantly increased education funding. He also implemented a block grant funding program giving school districts more flexibility, and he initiated a statewide uniform student testing program. Bangerter also emphasized economic development. During his eight years in office he made several economic development trips overseas, establishing trade relation offices in Asia and Europe. He also increased state funding for economic development programs such as the Centers of Excellence and Corporate Recruitment. Efficiency in government was the third major area of emphasis. Despite sizable increases in education and economic development funding, Bangerter kept state expenditures in line with the growth of inflation and the state’s population while implementing methods to increase the productivity of state programs. In November 1990 Governor Bangerter announced he would not seek a third term and retired to private life.