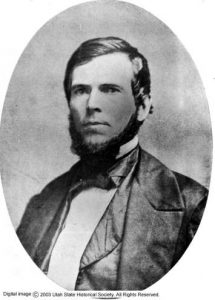 John Bidwell (1819-1900) was a pioneer, agriculturist, and politician from California.

The first emigrants to cross Utah with wagons came in 1841, six years before the Mormon pioneers, this party numbered thirty-two men and one woman, who carried a baby daughter in one arm and led a horse with the other. Nancy Kelsey, barely eighteen years old and the first white woman ever to see Great Salt Lake, was later remembered for her “heroism, patience and kindness.”

Named in part after its captain, John Bartleson, the party had numbered more than sixty when it assembled in May 1841 at Sapling Grove, near Westport, Missouri, for the journey to John Marsh’s California ranch at the foot of Mount Diablo in present-day Contra Costa County. Its most active organizer was twenty-one-year-old John Bidwell, who kept a daily diary of the journey.

Moving west, the emigrants traveled over the emerging Oregon Trail with Father De Smet and a Jesuit party guided by the renowned mountain man, Thomas “Broken Hand” Fitzpatrick. At Soda Springs, in present Caribou County, Idaho, about half of the original party decided to play it safe and continue on to Oregon.

The more resolute members, holding to their original destination, headed nine wagons south down Bear River “with no guide, no compass, nothing but the sun to direct them” toward the present border of Utah. Their track never became a trail and has long since disappeared, but as traced by historian Roy Tea using the Bidwell and Johns journals, the emigrants crossed the 42nd parallel into Utah on 16 August and camped near present-day Clarkston.

Intending to rest in Cache Valley while several men sought directions at Fort Hall, the party mistakenly crossed the low range just north of the Gates of the Bear to arrive in the Great Salt Lake Valley near present Fielding. After fording the Malad River opposite Plymouth, they continued south through the future towns of Garland and Tremonton until, desperate for water, they headed east to strike the Bear River, just south of Corinne.

The party then headed northwest, intersecting its own trail, to skirt the north end of the Great Salt Lake, find the Mary’s River (now the Humboldt), which, it was then believed, flowed from the lake to the Sacramento River, and follow it to California. They crossed Promontory Mountain on the route of the later transcontinental railroad and passed just north of Kelton to rest at Ten Mile Spring near the base of the Raft River Mountains.

Crossing Park Valley to the south of the present town, they came on 11 September to Owl Spring, just north of Lucin, where Kentuckian Benjamin Kelsey abandoned his wagons and put his wife and baby on horseback. Two days later, the emigrants were the first of many to arrive at Pilot Peak on the Utah-Nevada border and find relief at the freshwater springs at its base.

On the line of modern Interstate 80, the party crossed Silver Zone Pass and abandoned its remaining wagons at Relief Springs in Gosiute Valley, east of Wells, where the wagons were found in 1846 by Hastings Cutoff emigrants. The rest of the journey was a race with starvation which all barely won on November 4 when they arrived, destitute and almost naked, at Marsh’s Los Medanos Rancho. Some members of the Bartleson-Bidwell company later gained renown, including Bidwell and noted trails captain Joseph B. Chiles. Known for her courage and optimism, Nancy Kelsey, the first white woman ever to see Utah, died in California at age seventy-three.