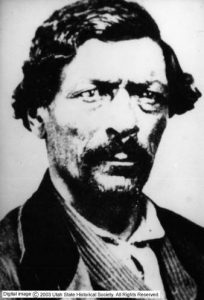 The West has always fascinated Americans. For much of the nation’s history people have believed that the West meant opportunity and adventure. Independence, strength, hard work, and sometimes a willingness to use violence have been the perceived ingredients of western success. Mythical characters stock our collective consciousness: the cowboy, the Indian, the gunfighter, the pioneer. One of the most enduring images is the mountain man, a solitary hunter/trapper exploring the wilderness, living by his wits, and alternately befriending and fighting the “savage” Indian. Few fit this model better than James P. Beckwourth.

The “true” details of Beckwourth’s life, appropriately enough, are shrouded in myth and mystery. Many of the facts and much of the mystery come from Beckwourth’s own account. In 1856 he teamed up with a would-be journalist and temperance reformer (albeit with a drinking habit) named T. D. Bonner to write The Life and Adventures of James P. Beckwourth, a lengthy recitation of adventures, bloody battles, close calls, and hairbreadth escapes–most starring Jim Beckwourth as the hero.

Beckwourth claimed to have been born in Virginia in 1798. His father, Jennings Beckwith, was a white man; his mother (whom he does not discuss) was apparently Beckwith’s African-American slave. The family moved to Missouri, perhaps for the relative freedom that the frontier gave to the interracial liaison. Jim learned to hunt with his father and soon demonstrated a love of adventure that would last throughout his eventful life.

Beckwourth was apprenticed to a St. Louis blacksmith, a useful profession that may have brought him to the attention of General William Ashley. Ashley and Andrew Henry owned the Rocky Mountain Fur Company, which spawned some of the most famous explorations and some of the most durable legends in the annals of the West. In 1822 the company advertised for adventurous men to explore the upper Missouri River and beyond in search of fur. The group recruited was a veritable who’s who of future mountain men: Jedediah Smith, Thomas Fitzpatrick, Etienne Provost, William Sublette, Jim Bridger, and David Jackson joined the company in its first years. Jim Beckwourth joined, too, perhaps as a blacksmith.

Beckwourth may have played a role in the early exploration of Wyoming’s South Pass and subsequent expeditions along the Bear, Weber, and Green rivers. What seems certain is that he was trapping in the Utah region by 1825, and he frequented the area over the next few years, often trapping in the Cache and Salt Lake valleys.

In that famous year of the first mountain man rendezvous at Henry’s Fork (1825), Beckwourth began to establish his reputation as a master storyteller. Like his colleague Jim Bridger, Beckwourth relished telling heroic and improbable tales with himself at the center. Many historians, on reading contemporary opinions of Beckwourth and analyzing his “autobiography,” have concluded that he was an audacious braggart and prevaricator. Many quote the description of Beckwourth as a “gaudy liar” as proof of his unreliability. Bernard DeVoto and others, however, note that exaggerated storytelling was a valued skill among mountain men and that the “autobiography” dictated to Bonner was an extension of that oral tradition. “Gaudy liar” may well have been a compliment bestowed upon Jim by his friends. Beckwourth also looked and dressed the part. Six feet tall and strongly built, he wore his dark hair to his waist and frequently sported braids, ribbons, earrings, gold chains, and Crow leggings.

The “facts” of Beckwourth’s life are impressive enough. Simply to endure in this unforgiving region implied that his hunting and survival skills were excellent. In 1828 he was captured and adopted by the Crow Indians (perhaps willingly, as he longed for the adventure). He may have enjoyed the lack of racial prejudice among the Crow and may also have welcomed the relative sexual license that the Indians permitted. Beckwourth became a “war chief” and participated in many battles, events that he gives great weight to in his life’s account. Others have noted, however, that “chief” was an unofficial and common enough title.

Beckwourth’s adventurous spirit led him to participate in the Seminole War of 1837-38. Returning to the West, he earned a substantial sum selling whiskey to the Cheyenne and operating saloons in New Mexico. In the 1840s he crisscrossed California, playing cards, prospecting, guiding settlers (a famous pass is named for him), and stealing horses. He served (perhaps unwillingly) as a guide for Colonel John Chivington at the notorious Sand Creek Massacre of the Cheyenne in 1864. In 1866 he returned to his beloved Crow territory and died near the Bighorn River.