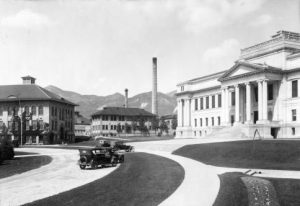 After the Mormons arrived in Utah, a Board of Regents was organized by Brigham Young to establish a university. With a growing demand for children’s education, Young and others felt that a university was needed to train men and women as elementary schoolteachers. The Board of Regents began the task by plotting the land for a large campus. Since funds were not available to begin construction, the board used the little money it had to build a stone wall around the university lands. In the meantime, plans were made to build a smaller building, later called the 13th Ward Schoolhouse, that would serve as the university until the larger campus was completed.

Image shows the construction progress of a new building, now known as the Park Building, on the University of Utah campus. Photo 27 August 1912.

But the board did not want to wait for the construction of the schoolhouse to begin university courses. Without an official building, the University of Deseret opened on November 11, 1850, at the home of a local resident, Mrs. John Pack. The Pack home remained the tentative campus of the University of Deseret for the entire first quarter. Dr. Cyrus Collins, the only professor, taught courses mainly in the sciences. The school was open to men only and cost $8.00 for the quarter.

Constantly on the move, the university opened its second quarter in a new location, the Council House on the southwest corner of Main and South Temple. A second professor, W. W. Phelps, was added to the faculty and the school admitted women. Then, when the 13th Ward Schoolhouse was finished in the fall of 1851, the campus was moved to this new building. About this time the university began to offer more resources and opportunities to students. New scientific instruments and books were acquired from local donors or imported from the East. The school offered students the possibility of receiving a teacher’s certificate. A third professor, Orson Pratt, was hired to teach astronomy, mathematics, and algebra.

Though the school seemed to be improving with each session, the University of Deseret was suddenly closed after its third quarter. Times had become increasingly difficult for the Mormon community in 1852. Crop failures and drought created greater concern for food and survival than education. This, along with the assumption that the university could now sustain itself, led the legislature to discontinue its annual $5,000 grant to operate the institution. Repeated demands for funding were ignored. Not until 1868 did the university reopen at the Council House location.

Times were different in Utah during the late 1860s. With the coming of the railroad, Utah’s relative isolation ended. Increased non-Mormon immigration boosted the economy and renewed the energy and need for a university. In 1868 the school’s Commercial Department resumed operation in the lower rooms of the Council House. Then in 1869 the university took a major step forward when Dr. John Rockey Park, who had been operating a school in Draper, was hired as principal (later called president). He assembled a faculty of some dozen professors to teach such diverse subjects as phonography, natural history, mathematics, chemistry, astronomy, music, and drawing. Increasing numbers of students made most classes crowded and oversized.

The evident need for expansion encouraged the board to establish the Timpanogos branch of the University of Deseret in Provo. Opened in 1870, it was the only institution of higher learning in Utah County until 1877 when it was replaced by the Brigham Young Academy, forerunner of Brigham Young University.

Meanwhile, construction of the main campus of the University of Deseret was made possible by improved economic conditions. By 1884 the University Hall was finally completed on Union Square, site of present West High School. Eight years later, in 1892, the Legislative Assembly changed the school’s name to the University of Utah. It was soon to have a new location as well.

In 1894 Congress deeded 60 acres of Fort Douglas land on the city’s east bench for the university campus. The first students registered for classes at the new location in October 1900. The momentous event culminated 50 years of struggle and determination to establish a permanent campus for the state’s first university.