A formidable wasteland of salt overlying a sea of mud, the Great Salt Lake Desert challenged travelers in Utah in the 19th century. Native Americans skirted the salty wilderness. Early immigrants usually chose the California Trail through Idaho to avoid it, at least until Lansford W. Hastings suggested a shorter way. After all, John C. Fremont had made it across in 1845. In 1846 some immigrants followed Hastings across the salt desert and experienced thirst and hardship none wished ever to repeat. For the Donner-Reed party it was another of the monstrous difficulties that plagued them. Gold seekers by the hundreds, looking for the quickest way to California in 1849 and 50, used the cutoff across the wasteland. More cautious travelers chose Hensley’s Salt Lake Cutoff on the east side of the lake up to the California Trail. Only a relatively few wagons, freight or family, dared try the salt desert after 1850. 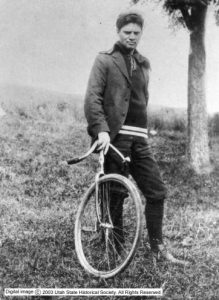 1896. William D. Rishel was a famous cyclist and founder of the Utah Auto Club.

Still, just looking at a map, the 75-mile straight run seems the shortest way from Salt Lake City to Nevada, perhaps worth the risk if one is really in a hurry, young, and somewhat reckless. Those who thought they could cross the Great Salt Lake Desert on a bicycle had to be more than adventurous. Such a young man was William D. Rishel. In the mid-1890s bicycles were all the craze. Bill Rishel, who had recently moved to Salt Lake City from Wyoming, loved the sport of bicycle racing. When William Randolph Hearst masterminded a transcontinental bicycle relay to promote his newspapers, he chose Rishel as the manager for the western division of the race. To Rishel, unfamiliar with the characteristics and history of the salt desert, the shortest route was obviously around the southern end of the Great Salt Lake.

When he announced the route, the wheelmen (as bicyclists called themselves) of Ogden were upset that their city was bypassed in favor of Salt Lake City. They blasted Rishel in the newspapers, stating that the southern route would end up taking more time. They challenged him to prove that it was faster. Perhaps this challenge is what prompted Rishel to see for himself. Possibly he felt it his duty to personally scout the course in the summer of 1896.

Rishel was not the first to cross the salt desert by bicycle, however. In 1884 Thomas Stevens, 29, on a transcontinental ride pedaled around the northern end of the lake. His bicycle had a 50-inch front wheel. Crossing the deserts of Nevada and northwestern Utah using only wagon roads, luckily dry, and alkali flats had been a chore. He ended up walking about a third of the distance. Persistence and endurance brought him around the northern shore of the lake and into Mormon farming lands, a Garden of Eden with good meals and a pretty Mormon girl.

Stevens had demonstrated that a northern route was feasible. No one before Rishel had dared to cross by the southern route. He had scouted and planned the relay route using established trails and the railroad line as much as possible, but it looked too slow to go around the northern end of the lake and then down to Salt Lake City. He had already promised promoters there and the governor that the route would swing through the capital, and he felt he could not back out. The southern route would have to do; speed, directness, and principle were essential. Wiser minds advised Rishel not to try the desert, but a strong, energetic, determined young man is hard to convince. Water was the big problem, but from an old prospector he got a crude map showing the only available source, Cook’s Spring in the Lakeside Mountains. Rishel’s route would be somewhat north of Hastings Cutoff and then down the east side of the Lakeside Range.

It was probably mid-July when Rishel and his friend Charlie Emise and their bikes started by train from Salt Lake City to Terrace, a railroad town 28 miles southwest of Park Valley. Their only supplies were two army canteens of water each and some sandwiches. They began their ride at 2:00 a.m. Their way over the glistening salt was lighted by a full moon. Initially, the going was easy and fast on the salt crust in the cool predawn. Before long, however, they hit the mud flats where their wheels became so mired they could barely move them, even by pulling the bikes along. They were forced to carry them for long periods until they reached sandy areas where they could ride—sometimes. The sun was soon blazing down on the two young men. Water ran out with half the distance still to go. Their only hope was to find the spring. When Emise sighted a faint trail into the mountains they followed it and found a dribble of water dripping into a tiny half-filled rock depression. They drank and then spent hours trying to get enough water into the canteens to complete the journey.

After dark they started again, only to find more mud and slow going. As they neared the lake’s south end, sand and marshes grabbed their wheels and feet. Hordes of mosquitoes and other insects attacked them, but at least it was cooler. Finally, they made it through the quagmire and rode into Grantsville about midnight, tired, thirsty, and hungry after a 22-hour and 100-mile ordeal.

But with the optimism of youth, Rishel remained convinced that the southern route was faster if the riders were properly equipped and if water were cached at the relay points. Therefore, these preparations for the relay race were made. Fortunately for the riders, a desert rainstorm forced Rishel to announce a change of route to go around the north end of the lake.

With time to mellow him and no relay race to distort wisdom, Rishel was to proclaim later in life that he would not repeat his feat again for a million dollars!