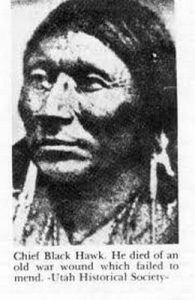 The Black Hawk Indian War was the longest and most destructive conflict between pioneer immigrants and Native Americans in Utah History. The traditional date of the war’s commencement is 9 April 1865 but tensions had been mounting for years. On that date bad feelings were transformed into violence when a handful of Utes and Mormon frontiersmen met in Manti, Sanpete County, to settle a dispute over some cattle killed and consumed by starving Indians. An irritated (and apparently inebriated) Mormon lost his temper and violently jerked a young chieftain from his horse. The insulted Indian delegation, which included a dynamic young Ute named Black Hawk, abruptly left, promising retaliation. The threats were not idle – for over the course of the next few days Black Hawk and other Utes killed five Mormons and escaped to the mountains with hundreds of stolen cattle. Naturally, scores of hungry warriors and their families flocked to eat “Mormon beef” and to support Black Hawk, who was suddenly hailed as a war chief.

Encouraged by his success and increasing power, Black Hawk continued his forays, stealing more than two thousand head of stock and killing approximately twenty-five more whites that year. The young Ute by no means had the support of all of the Indians of Utah, but he succeeded in uniting factions of the Ute, Paiute, and Navajo tribes into a very loose confederacy bent on plundering Mormons throughout the territory. Cattle were the main objectives of Black Hawk’s offensives but travelers, herdsmen, and settlers were massacred when it was convenient. Contemporary estimates indicate that as many as seventy whites were killed during the conflict.

The years 1865 to 1867 were by far the most intense of the conflict. Latter-day Saints considered themselves in a state of open warfare. They built scores of forts and deserted dozens of settlements while hundreds of Mormon militiamen chased their elusive adversaries through the wilderness with little success. Requests for federal troops went unheeded for eight years. Unable to distinguish “guilty” from “friendly” tribesmen, frustrated Mormons at times indiscriminately killed Indians, including women and children.

In the fall of 1867 Black Hawk made peace with the Mormons. Without his leadership the Indian forces, which never operated as a combined front, fragmented even further. The war’s intensity decreased and a treaty of peace was signed in 1868. Intermittent raiding and killing, however, continued until 1872 when 200 federal troops were finally ordered to step in.

The Black Hawk War erupted as a result of the pressures white expansion brought to Native American populations. White settlement of Utah altered crucial ecosystems and helped destroy Indian subsistence patterns which caused starvation. Those who did not starve often succumbed to European diseases. Contemporary sources indicate that Indian populations in Utah in the 1860s were plummeting at frightening rates. White efforts to establish reservations contributed additional pressures.

These conditions were almost universal among western Indians during the period, and in this sense the war can be viewed as an expression of the general Indian unrest and warfare that dominated the trans-Mississippi West during the 1860s. Similar conflicts also occurred during the decade between Indians and non-Mormon settlers in each of Utah’s neighboring territories. These confrontations, however, were quickly (and brutally) put down by federal troops; however, the mounting crusade against polygamy and lingering “Utah War” mentalities made the situation different in Utah. The Black Hawk War was unique among the era’s western Indian wars in that the antipathy that existed between the United States government and the LDS church provided Utah’s natives with the opportunity to pursue their hostile activities for an extended period of time without incurring the swift and destructive military reprisals suffered by other groups. Not surprisingly, the war ended almost without incident when federal troops were finally ordered to engage the Indians in 1872.