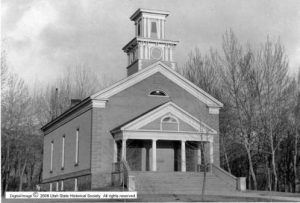 Bountiful is Utah’s second settlement and was named for one of the ancient American cities described in The Book of Mormon. Bountiful was settled not long after Mormon pioneers arrived in the Salt Lake Valley. Perrigrine Sessions explored the area just three days after his arrival. In September 1847 Sessions gathered his family into their wagon and herded 300 head of cattle into the South Davis Valley. Other families moved into the area and began planting crops the following year. Fifty-three families had established farms in the area by 1850.

Because of repeated Indian problems, a fort was constructed of dirt walls, three-quarters of a mile square, with the townsite being laid out within its boundaries. Each man from the area was required to put in a ten-hour day of labor toward its construction, and all settlers were urged to move within its fortified walls. Though the fort was never completed and its gates were not installed, portions of the walls stood until the turn of the century.

The settlement was first called “Session’s Settlement,” and later “North Mill Creek Canyon,” which was shortened to “North Canyon.” In 1854, the first post office was established and was named “Stoker” in honor of the settlement’s Mormon bishop, John Stoker. On 17 February 1855 the name Bountiful was accepted unanimously by the people of the community.

On 12 February 1857 ground was broken for Bountiful’s landmark five-spire LDS tabernacle. It was built at a cost of approximately $60,000 using local materials and local labor. Augustus Farnham drew the plans for the 86-foot by 44-foot structure. The best artisans and craftsmen were employed in executing the plaster casting, hand carving, and the winding stairways. It was constructed on a rock foundation, and featured adobe walls with a red pine roof attached with wooden pegs. Bountiful was evacuated and its citizens sent to central Utah during the Utah War (1857–58). As Johnston’s Army approached, construction on the tabernacle was halted and grain was stored in its foundation. It took six years to complete the structure. A two-day dedicatory service on 14 and 15 March 1863 brought more than 150 visitors, including many dignitaries. Brigham Young presided while Heber C. Kimball offered the dedicatory prayer. The Bountiful tabernacle remains the oldest chapel in continuous use in the state of Utah.

On 14 December 1892 Bountiful was officially incorporated by the territorial legislature. Joseph L. Holbrook served as its first mayor. Bountiful originally included all of the south Davis region, but soon its area was reduced. In November 1895 the Woods Cross and West Bountiful areas voted to separate from Bountiful. Later, Centerville was incorporated. Eventually Bountiful was reduced to an area slightly less than 10.5 square miles.

For more than four decades Bountiful remained a sleepy farming community, but in the 1950s its close proximity to Salt Lake City made it an ideal residential community for suburban commuters. Families started moving from Salt Lake City to the suburbs, causing Bountiful’s population to more than double. Its demographics also changed since many of these new residents were professionals (doctors, lawyers, educators, executives) who commuted to work in Salt Lake City.

Bountiful’s growth continued throughout the 1960s and 1970s but slowed in the 1980s to only 11 percent. The 1990 census recorded a population of 36,659, revealing that Bountiful had fallen to the position of the second largest city in Davis County. Economic growth remains the city’s top priority with downtown redevelopment as its major concern.