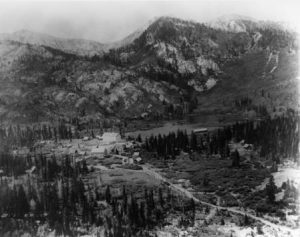 In 1871 William Stuart Brighton, a native of Scotland, preempted 80 acres at the top of Big Cottonwood Canyon east of the Salt Lake Valley. He, his wife Catherine Bow, and their children spent the summer living there in a tent. The horses, cows, and other farm animals they brought with them found plenty to eat in the meadowlike areas around the lake. The following summer William built a one-room cabin, adding to it over time. Because of booming mining activity in Alta and Park City, men traveled over the mountains on foot or horseback between the two camps. They found the Brightons’ place a convenient halfway point to rest and eat. Catherine, an excellent cook and fisherwoman, served them fresh trout she had caught in Silver Lake or mutton obtained from a sheepherder and hot buttermilk biscuits with freshly churned butter. Such food, plus the pristine alpine scenery, proved irresistible. After sampling her hospitality one sojourner, Joseph R. Walker, suggested that the Brightons open a hotel for summer guests. He said he would like to bring his family to stay in such a place.

The first Brighton Hotel, built in 1874, was a two-story wooden structure with seven small bedrooms, a dining/sitting room, and a lean-to kitchen. White muslin covered the raw lumber of the bedroom walls. To keep livestock away from the guests William built a fence around the hotel. Eventually, several one- and two-room cabins were built for vacationing families, according to granddaughter Stella Brighton Nielsen, to keep the children from disturbing the hotel guests. Each cabin had a wood-burning stove, and lighting was provided by a kerosene lamp or candle. Lanterns using candles were crafted from lard buckets or large tomato cans.

As more people sought escape from summer’s heat in the Salt Lake Valley, the Brightons, urged on by friends, built a larger facility. A three-story wooden hotel of rustic design was erected in 1893. William Brighton hired the lumber and mill firm of Taylor, Romney, and Armstrong to build the 30 by 100 foot structure. It was to be completed by mid-June and would be “modern throughout.” Nielsen remembered watching its construction. Her “uncle, Jack McCarthy, was throwing bricks to a man on the second floor who caught them, when the sitting room fireplace chimney was being built on the east wall of the hotel.” She said only the first two floors of the hotel were finished, and the third floor was used to house the help.

An 1895 brochure advertising the resort described the hotel as a “new and commodious structure…[with] fifty light and airy rooms” available for $2.00 a day. That year the hotel was under the management of a Major G. S. Erb, Catherine and William Brighton having died in July 1894 and April 1895 respectively.

Travelers to Brighton could take the stage from downtown Salt Lake City, a trip of about seven hours, or ride the Utah Central Railroad to Park City and then transfer to Kimball’s Stage Line for the rest of the journey—about five hours total time. Erb advised his guests to bring their “flannels, overcoats and wraps” for the canyon’s cool nights. And in the resort’s casual atmosphere old clothes were the perfect daytime attire for hiking, horseback riding with a guide, picnicking, and fishing. The brochure touted the beauties of Lakes Mary and Martha and Twin Lakes. To reach the latter one could follow the trail to Alta or “go south from the Hotel, past Sunrise Lodge, the summer home of Judge Powers, and take the old trail above Mistletoe Lodge, the residence of Harry Haynes, and follow the trail westerly….” Wildflowers and songbirds added to the beauty of the lakes, rugged peaks, and wooded slopes. Here the “toilers of the valleys” would find health and rest. One thing they would not find, according to Erb, was rattlesnakes. None had ever been seen in Brighton, he said.

Sometimes bonfires were built in a large open area and residents and guests would gather round in the evening to sing and play music. Stella Nielsen remembered roasting potatoes in the bonfires, taffy pulls, and dancing in the hotel dining room to the music of a fiddle and an accordion. Anyone in the canyon was welcome to join the fun. By the 1890s the Brighton area was dotted with the summer cabins of city dwellers. The resort also had a store that stocked canned goods and other supplies. William Brighton had opened the first store in his original cabin. Later amenities would include a larger store, post office, and telephone.

Summer residents and visitors still find beautiful alpine scenery in Brighton and catch fish in the lakes. It is doubtful, though, that present-day anglers enjoy the success of Catherine Brighton who landed many a trout in her apron to feed family and guests or the record 1895 haul of 63 in a day by one fisherman that Erb reported.