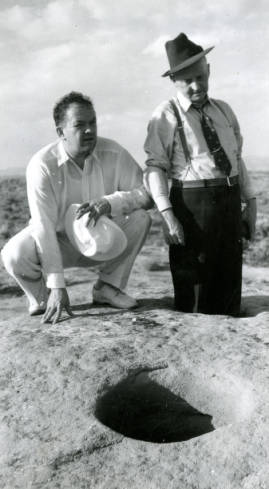 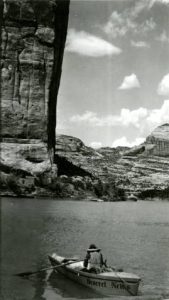 Developing national parks and monuments was his special interest.

John Eugene Broaddus was born in Plano, Illinois, January 17, 1882, to Henry Arthur and Viola Hail Broaddus. As a young man he came to Salt Lake City in 1900 and apprenticed himself to the Columbia Optical Company. A quick student, he learned the profession of making glass lenses and was soon a leading optometrist in the state. In 1906 he married Clara Louise Deighton, and they had a daughter, Viola Louise.

Optometry brought Broaddus in contact with photography and the scenic wonders of Utah. As early as 1916 he was publicizing Bryce Canyon and Cedar Breaks through word and picture. His work helped to secure national park status for Bryce Canyon and Zion. He also helped to publicize the Kamas-Mirror Lake road which opened the beauty of the previously remote Uinta Mountains to visitors. Working with E. P. Pectol, Broaddus took photographs and prepared brochures for the Wayne Wonderland Club, a group of Wayne County boosters who encouraged the federal government to establish Capitol Reef as a national monument.

In 1935 Broaddus served as a member the Utah State Museum Association which, under the sponsorship of the State Planning Board and with funds from the Utah Emergency Relief Administration, conducted an extensive archaeological and paleontological reconnaissance of southern Utah and the Uinta Basin. The geology and wildflowers of his adopted state also intrigued him, and he became a popular lecturer on those topics. 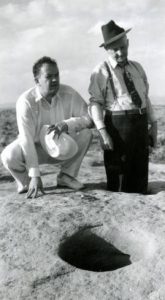 treacherous Yampa and Green rivers in northwestern Colorado and northeastern Utah. He served as official photographer for the expedition as well as its chief spokesman. He publicized these wild rivers through a special radio program aired by KSL.

Recalling the scenic beauty of the canyons of the Yampa, Broaddus stated: “No artist can paint and no word artist can possibly convey to the intelligence of the human mind the beauty and the majesty of what nature has given to Utah in the way of color in her deep canyon gorges….” According to Charles Kelly, Broaddus ”was the first enthusiastic photographer to visit the region, and spent much time and effort in publicizing its scenic wonders.” Chiefly through the joint efforts of Broaddus, Kelly, Miller, and Frazier, Dinosaur National Monument was later enlarged by President Franklin D. Roosevelt.

Broaddus was a charter member of the Salt Lake Kiwanis Club and assisted club efforts to provide recreational facilities for underprivileged boys. He also served as a member of the Utah State Fish and Game Commission.