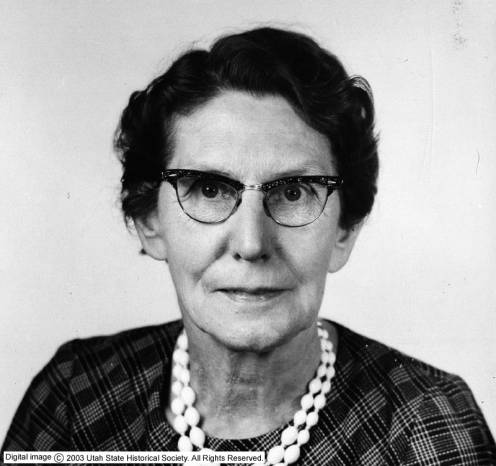 Juanita Brooks, a noted Utah historian, is famous for the integrity with which she insisted upon recounting the saga of the Mountain Meadows Massacre. She was born in Bunkerville, Nevada, in 1898, descending through both her father, Henry Leavitt, and her mother, Mary Hafen, from Mormon pioneers of southwestern Utah and adjacent areas in Arizona and Nevada. She was raised in Bunkerville and in 1919 married Ernest Pulsipher, who died of cancer little more than a year later, leaving her with an infant son.

Under great adversity she acquired a bachelor’s degree from BYU and a master’s degree from Columbia University. Settling in St. George, Utah, she became an instructor of English and dean of women at Dixie College. In 1933 she resigned from the college to marry widower Will Brooks, to whose four sons she became a devoted stepmother. Within five years the couple added a daughter and three sons to their family.

As a compensation for her interrupted teaching career, Brooks turned her attention to the history of her native region. Writing late at night on a typewriter on her kitchen table, she established herself as a historian of professional competence. She had a genius for locating pioneer diaries, which she collected for the WPA in the 1930s and for the Huntington Library in the 1940s. She excelled in editing pioneer documents, her most important productions being the diaries of John D. Lee and of Hosea Stout. She wrote numerous historical articles and a variety of family narratives, including a classic biography of her pioneer grandfather, Dudley Leavitt, as well as her own autobiography. For many years she served on the Board of the Utah Historical Society.

Two books elevated Brooks to fame: The Mountain Meadows Massacre (1950) and John Doyle Lee: Zealot, Pioneer Builder, Scapegoat (1961). The books demonstrated that Mormon militia, acting upon prior orders, assisted Indians in the treacherous massacre of California-bound emigrants in 1857 and that John D. Lee, tried and executed for the massacre, was unfairly singled out from a number of responsible officers. Characterized by impeccable research and deep compassion, these works showed that the massacre was a tragedy for the Mormons as well as for the emigrants who died at their hands. Courageously defying leaders of her church who would have preferred to leave the topic unstirred, Brooks became a symbol of intellectual independence in a faith noted for its emphasis upon conformity.