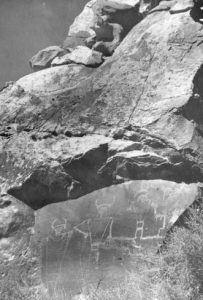 Pectol was born May 16, 1875, in Glenwood, Sevier County. In 1888 his family moved to Cainesville. In 1910 he bought some land at Grover and that same year worked in a store in Torrey. He built a lean-to on the store building and moved to Torrey, purchasing the business and making that town his home until his death. For three years he taught school while his wife, Dorothy Hickman Pectol, operated the store.

Pectol was peculiarly blessed with a love of nature. During the 22 years he lived at Cainesville he frequently passed through the section now designated as Capitol Reef. To most travelers it was merely a rough stretch of road, an obstruction to travel, and “a bad place to lose a cow.” But to Pectol it was one of the beauty spots of Utah. Long before it became a national monument he had named most of its outstanding landmarks, and those names have been preserved. He originated the name Wayne Wonderland for all of the colorful country lying between Bicknell and the Colorado River.

Hickman was born at Milford, Utah, on September 28, 1887, a grandson of the noted pioneer Bill Hickman. When he was eight or nine years old, the family moved to Cainesville, passing through what was later called Wayne Wonderland. After returning to Milford for a brief time the Hickman family moved to Loa, county seat of Wayne County.

His family were cattle ranchers, but Joe Hickman aspired to become a teacher. He attended the University of Utah, Brigham Young University, and Utah State Agricultural College, graduating in 1913. On returning to Wayne County he began teaching school in Torrey. In 1918 he was appointed principal of Wayne County High School in Bicknell and the next year became county superintendent of schools.

Hickman was a brother-in-law of Ephraim P. Pectol who has been called the father of Capitol Reef National Monument. But the two men worked together to promote the scenic values of Wayne County until Hickman’s life was cut short, leaving Pectol to complete the project.

Hickman and Pectol were almost the only men in Wayne County who realized the value of the unusual erosional effects and high color of the cliffs and canyons they called Wayne Wonderland. They were convinced that if the area could be opened to the public it would attract visitors from all over the nation, a belief since proved entirely correct.

The first effort to publicize Wayne Wonderland occurred in 1921 when a Boosters’ Club was organized in Torrey with Pectol as president and Ellis E. Robinson as secretary. Pectol furnished stories and photographs to any newspaper or magazine that would publish them. In this he was assisted by Hickman.

The Boosters’ Club could not properly publicize Wayne Wonderland, so in 1924–25 Hickman organized the Wayne Wonderland Club and included groups from other communities. In time this became the Associated Civics Club of Southern Utah.

In November 1924 Hickman was elected to the state legislature and immediately introduced a bill to have part of the Wayne Wonderland designated as a state park. His bill passed and 16 acres in the vicinity of Fruita, including a large natural bridge (Hickman Bridge), was set aside. Dedication ceremonies were held in Torrey on July 20, 1925, and Gov. George H. Dern was the principal speaker. A large sign was erected over the Fremont River bridge west of Torrey reading “Gateway to Wayne Wonderland.” This sign was later moved to Torrey where it remained for many years.

In the meantime, Hickman had introduced a resolution in the legislature asking the federal government to consider Wayne Wonderland as a national monument.

On July 24, only four days after the celebration in Torrey, Hickman went to Fish Lake with a party of friends. A sudden storm threw him out of his boat, and unable to swim, he drowned.

Pectol continued the work almost alone for the next ten years. He was elected president of the new Civics Club. At his suggestion $150 was appropriated for the expenses of Dr. J. E. Broaddus, a well-known scenic photographer in Salt Lake City, to come to Wayne Wonderland to photograph its beauties. For several years afterward Broaddus exhibited his photographs and lectured on Wayne Wonderland. This publicity not only made the area known to the public but eventually resulted in the creation of Capitol Reef National Monument.

In 1933 Pectol was elected to the state legislature, and almost his first act was the introduction of a memorial to Congress asking for the creation of Wayne Wonderland National Monument. During the next four years he neglected his business to guide federal investigating parties and make a boundary survey, assisted by Arthur Meeks, Arthur L. Chaffin, and George W. Okerlund.

This great labor of love was finally rewarded on August 2, 1937, when President Franklin D. Roosevelt signed the proclamation that created Capitol Reef National Monument in the heart of Wayne Wonderland, forever setting it aside for the enjoyment of the public. Unfortunately, no funds were provided to develop and operate it, and not until 1950 was it officially opened to the public. In 1971 Congress gave Capitol Reef national park status.

Pectol died on October 8, 1947, but he had lived long enough to see the creation of the monument for which he had worked so long.