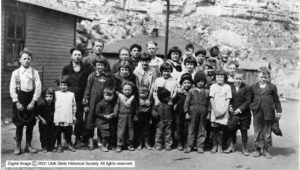 Groups gathered on streets of Castle Gate during a mining disaster. Castle Gate was a coal mining community settled in 1888. The town survived for almost a century until 1974 when it was dismantled due to expanded mining operations.

On 8 March 1924, in the second major mine disaster of the twentieth century in the Utah coal fields, 172 men lost their lives, including one worker who inadvertently inhaled deadly carbon monoxide during the rescue efforts. At 8:00 A.M. two violent explosions ripped through the Number Two Mine of the Utah Fuel Company, located at Castle Gate in the canyon north of present-day Helper and Price, in Carbon County. The cause of the disaster was attributed to inadequate watering down of the coal dust from the previous shift’s operations, as well as the use of open flames in the workers’ headlamps. No workers in the mine survived the explosion; fatalities included 49 Greeks, 22 Italians, 8 Japanese, 7 English, 6 Austrians (Yugoslavs), 2 Scotch, 1 Belgian, and 76 Americans, including 2 African-Americans. The ethnic make-up of the victims of the disaster reflected the international character of Utah’s mining industry. 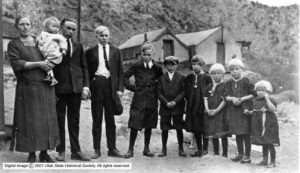 collected publicly for the aid of the 417 individuals who were left without support following the disaster. The committee hired one of the first social workers in the country, Annie D. Palmer, to assess needs and disburse funds. A granite and bronze monument is located in the canyon north of Helper to mark the general location of the mining accident; the Castle Gate cemetery east of the canyon contains many of the victims’ graves.