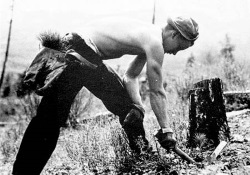 Compared to the rest of the nation Utah was hit particularly hard by the Great Depression of the 1930s. In 1933 Utah’s annual per capita income of $300 was a mere 80 percent of the national average, and 35.8 percent of Utah’s work force was unemployed. The New Deal legislation of Franklin D. Roosevelt created sweeping changes and brought federal government involvement to relieve the nationwide suffering. One of the New Deal’s most popular programs, the Civilian Conservation Corps (CCC) had a profound effect in Utah.

The CCC aimed to provide work for the nation’s estimated 5 to 7 million unemployed young men who ranged in age from sixteen to twenty-five. In order to qualify for CCC employment, men in this age category had to be jobless, unmarried, and from families with parents on relief. Across the country applications far outnumbered allotments, and in Salt Lake County the situation was no different: over five men applied for each vacancy on the initial enrollment. Pay was $30 per month, $25 of which was sent home to help support the worker’s family.

On April 5, 1933, President Roosevelt signed the bill creating the CCC, and less than six weeks later construction started on several Utah camps. Most were like the camp built in American Fork Canyon. It consisted of officers’ quarters, a mess hall and kitchen, a shower room, a hospital, a recreation hall, and utility buildings. A standard camp had four barracks and 200 men. During the CCC’s nine years of operation 116 camps were built throughout Utah, although not all were used at once.

The Forest Service and the Bureau of Land Management were the largest users of the corpsmen. From 1933 to 1942 CCC workers planted more than 3.2 million trees on Utah’s mountains and range lands. They also built several large dams, including the preliminary work on the Deer Creak Dam. They built roads, renewed streams and lakes, developed and improved thousands of campgrounds and recreational areas, and constructed several ranger stations that are still in use.

The purpose of the CCC extended beyond providing employment and improving the land. Workers also learned valuable skills that increased their chances of obtaining permanent employment when jobs became available. During an average eighteen months of service a CCC worker could gain skills in a variety of vocations such as rock masonry, carpentry, road construction, and cooking. In addition, the daily discipline and regimen of the corps created a group of war-ready young men, many of whom went on to serve in World War II.

Before this program was terminated, the CCC had spent over $52 million in Utah and brought thousands of youth from across the nation to work in the state. It helped keep Utah’s economy alive, renewed the state’s environment, and provided job training and military discipline to its team of youthful workers.