Until the Civil War, the United States had no national currency, and most of the coins in circulation were privately minted. In order to provide a satisfactory circulating medium for the early settlers of Utah, Brigham Young and his associates in the LDS church established a church mint in 1848, and also placed in circulation paper money backed by the treasury and officials of the LDS church. Coins were minted in 1849, 1850, and 1860; currency with Brigham Young’s signature was placed in circulation in 1848, 1850, and 1858. 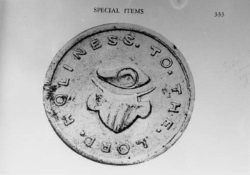 The church mint, a small adobe building on the northeast corner of Brigham Street (South Temple) and Main, was made possible when members of the Mormon Battalion returned from California in the summer and fall of 1848, bringing gold dust earned in California after the discovery of gold there earlier that year. In addition, some twenty or more young Mormons were sent in 1849 and 1850 to California to prospect for gold. Although they were not particularly successful, they did send back or take back to Utah several thousand dollars worth of gold dust. Much of this ended up in the church treasury. In November 1848 Brigham Young commissioned John Kay to make dies and coin the gold dust. The inscription for the Deseret coins was designed by Brigham Young, John Taylor, and John Kay. On one side, the phrase “Holiness to the Lord” encircled the ancient emblem of priesthood, a three-point Phrygian crown over the all-seeing eye of Jehovah. On the other side, the words “Pure Gold” and the denomination encircled clasped hands, the emblem of friendship. The stamps for the coins were engraved by Robert Campbell, a young Scottish convert. Forty-six $10 gold pieces were coined before the crucibles were broken in late December. New crucibles could not be brought in from the Midwest until the following fall. 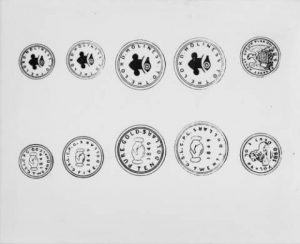 Recognizing the need for a temporary circulating medium superior to packets of gold dust, Brigham Young and his associates made plans to issue paper currency until coins could once more be minted. The first issue consisted of small bills, two inches wide and four inches long, hand-printed by pen and ink on plain white paper (there was not yet a printing press in the region). Bills were made for 50 cents, $1.00, $2.00, $3.00, and $5.00, and were signed by Brigham Young, Heber C. Kimball (Brigham Young’s counselor), and Newel K. Whitney, presiding bishop of the church. The bills were stamped with the seal of the Twelve Apostles, which consisted of the emblem of the priesthood encircled by sixteen letters: P.S.T.A. P.C.J.C.L.D.S. L.D.A.O.W., which was an abbreviation for “Private Seal of the Twelve Apostles, Priests of The Church of Jesus Christ of Latter-day Saints, in the Last Dispensation All Over the World.” All of the 830 notes in the initial issue, with a face value of $1,365.00, bore the date January 2, 1849.” A second issue of 735 separate bills with a face value of $1,217.50 was issued bearing the date of January 5, 1849. The church also had a supply of engraved Kirtland, Ohio, bank notes, which bore the signatures of Joseph Smith and Sidney Rigdon, and decided to reissue these with the additional signatures of Young, Kimball, and Whitney. Thomas Bullock, clerk of Brigham Young, also put a private mark on the bills to authenticate those issued against gold dust. Some 135 of these bills in $1.00 and $3.00 denominations were placed in circulation on 10 January 1849, and 256, mostly of the $5.00 denomination, were in circulation before fall, bearing a face value of $1,331.00. Later in January 1849, Truman Angell, church architect, made a press that could print paper currency. On 20 January 1849 a total of $3,329 bills in 50 cents, $1.00, $2.00, and $3.00 denominations were issued; these carried a face value of $5,529.50, and were modeled after the handwritten bills issued on 2 January. Feramorz Y. Fox, who studied the records of these issues, which are in the LDS Church Archives in Salt Lake City, found that these issues of currency were secured by an 80 percent reserve of gold. Most of the gold, in California-minted coins or dust, was paid in to the church as tithing. These gold-backed church treasury notes, or perhaps more accurately, warehouse receipts for gold dust, appear to have been a generally acceptable means of exchange in the Salt Lake Valley. When the church mint resumed coinage in the fall of 1849, the paper currency was redeemed, and most of it was destroyed. Of the original 5,150 notes, only 184 notes, valued at $269.00, were outstanding in May 1850.

Crucibles for minting were brought to the territory in September 1849, and the church mint was ready to resume operations. Dies were prepared for $2.50, $5.00, and $20.00 gold pieces to supplement the $10.00 dies made in late 1848. There was a slight change in the new design. The words “Pure Gold” were represented by the initials P.G. and the letters G.S.L.C. (for Great Salt Lake City) were added. The new coinage began in September 1849 and continued into 1851. Approximately $70,000 in gold pieces, mostly in the lower denominations, were coined, some on church account, but mostly on private account. The coins were at first minted without any alloy, but later a small percentage of silver was added to increase hardness. 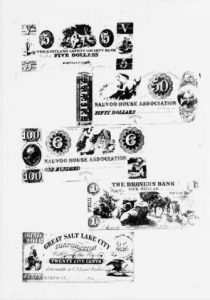 The edge was not milled. The coins were accepted for full value in the Salt Lake Valley, but most of them went east to buy machinery and equipment and other needed commodities not available in “Deseret.” With the discontinuance of new supplies of gold dust, the press and stamp were sold to John and Enoch Reese, of Carson Valley, Nevada, who minted coins from Nevada gold dust for a brief period. The dies were destroyed in the early 1850s.

In 1860 approximately $1,000.00 in $5.00 gold coins were produced at the church mint. The design was much prettier and more artistic than the 1849-51 coins. On its face the coin had a crouching lion in the center with three mountain peaks in the background and a small stretch of water in the foreground. Around the rim was “1860 Holiness to the Lord.” The phrase “Holiness to the Lord” was written in characters of the Deseret Alphabet. The reverse side had an eagle with outstretched wings and a beehive on its breast and an olive branch and arrows in its talons. It closely resembled the United States $5.00 gold piece of the time. Around the edge was “Deseret Assay Office, pure gold 5 D.”

There was one other issue of local currency. In January 1858, when troops of the United States Army (“Johnston’s Army”) were en route to Utah, Brigham Young and his associates were certain that the army intended to conquer the Saints. For that reason they determined to outfit a large defensive force to hold off the troops at Echo Canyon, and the settlers abandoned their homes in northern Utah in order to avoid any conflict. Cost of the defense was met by the issue of approximately $100,000 of “Deseret Currency” in denominations of $1.00, $2.00, $300, $5.00, $10.00, and $20.00. Most of these notes were personally signed by Brigham Young and his secretary Hiram B. Clawson. Not having sufficient gold to serve as backing, the church made the currency redeemable in livestock–horses, cattle, and sheep–of which it had large herds. The church expected to issue engraved notes, but pending their completion, $3,750.00 in “defense” notes were printed by the Deseret News and issued immediately. These were printed from 19 February to 17 March 1858. They followed by a “Move South” series consisting of $40,146.00 in printed notes issued from 31 March to 17 July 1858.

Engraved currency was ready in September 1858, and during the next month 8,512 engraved notes were issued, bearing a face value of $16,512.00. These notes represented the first copperplate printing done in the West and were elegant. As described by U.S. Treasury investigator Marcus E. Jones, on one end was an Indian with bow and arrows, or a gun (in the $3.00 bill); on the other end was a hunter in various attitudes. Between the hunter and Indian was a beehive. The $1.00 bill had, in addition, a group of livestock in the center. The $2.00 bill had the picture of a man plowing with a yoke of oxen, and a range of mountains in the background. The $3.00 bill had a sheep-shearing scene and two women milking cows, one on either side of the scene. The $5.00 note pictured a group of farmers harvesting wheat, with a bust of George Washington on the right side and an American eagle just below it. The wording on the $3.00 bill was “Deseret Currency Association will pay the bearer $3.00 in livestock on presentation of $100”; that is, the Currency Association, Brigham Young, president, would redeem the bills in livestock at going prices. The back side of the thin paper bills was blank.

All of the 1858 notes presented were redeemed by July 1859. Some of the currency was redeemed with horses and “horned stock,” and some of it was contributed as tithing. In 1862, the books of the Deseret Currency Association were closed. In January 1864, as part of the Civil War, the United States outlawed the issuance or circulation of any currency or substitute for money by private firms or associations. Shortly thereafter, all remaining notes held by the Deseret Currency Association were burned and the dies destroyed.