The 1858-60 diary of Captain Albert Tracy, an officer in Johnston’s Army, contains many enlightening glimpses of life in an army camp. The author’s vivid descriptions and understated humor make it a delight to read. Born in Buffalo, New York, on April 28, 1818, he spent some of his boyhood in Canada. He enlisted in the army in Maine and in February 1847 was commissioned a 1st lieutenant in the infantry. Following “gallant and meritorious conduct in the battle of Chapultepec,” he achieved the rank of captain, but he resigned his commission in 1848. He resumed it in 1855 with help from President Franklin Pierce, a close acquaintance. When the Utah Expedition was organized in 1857 Tracy was put in command of Company H. 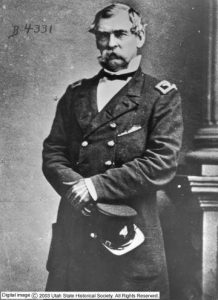 Despite the ominous clouds looming over the peaks north and west of Camp Floyd, Utah County, on February 28, 1858, Lieutenant Colonel Charles F. Smith ordered a grand review. Any other officer, Tracy wrote, would have settled for “muster and inspection in quarters.” But Smith was obdurate and resolved that the pageant should proceed. The men formed into battalions or separate batteries and marched across a stream and past the small town of Fairfield, called Frog or Frogtown by the troops, to a large area where the review was to take place. It took some time for the formation, nearly an eighth of a mile long, to position itself, for sagebrush-studded ground, Tracy observed, “never yields upon mere occasions of military display.” Meanwhile, the storm hit, sweeping “down so bitterly upon us…that it was with difficulty the most resolute could refrain from turning in his place, to avoid its cutting cold. Some suffered slight freezing at the ear-tips, or extremity of nose, and many were so chilled as for the time almost to lose the use of hands and arms.”

By the time Smith and his aides were positioned to review the troops, the snow was advancing toward them like “a thick white wall….and word of command, sound of bugle, or bray of band were, with the uproar of the storm soon muffled well nigh from hearing…..only the habit of the men kept them in line or step.” The companies’ flags and even the line of march in front could scarcely be seen, and the men “only guessed at the points of wheeling, following…in the track” of those before. Tracy continued, “Coming round at the point of the reviewing officer—we distinguished through the cloud, dim objects, gray and ghost-like, believed to be Smith and his staff, and at these we saluted, agreeable to the regulation, with our sabres—doing the best we might.” When the storm lessened a bit Tracy could see snow piled up like ice cream on band instruments and epaulets. As for the men’s broad-brimmed felt hats with ostrich plumes, “they were simply a mess, and shocking to behold.” The crestfallen troops finally filed off the field toward their company grounds. Colonel Smith relented somewhat at the end and ordered one gill (4 ounces) of whiskey per man which “did much to salve over the wounded dignity and morale of the morning.” The 5th Infantry was quite demoralized, Tracy said, over the ruin of their brand new hats and plumes, and his own company felt quite put out by it all as well.

Tracy concluded that “There is no other man in the army who could have done all this with impunity. Yet knowing the brave record, and the generally just character of Smith—it is likely he will be forgiven even the vagary of this review in a February snow-storm.”