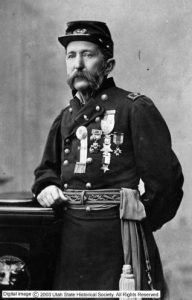 An Irish American named Patrick Connor was a seminal figure in late 19th-century Utah. Often called “the father of Utah mining,” he was involved in military, economic, and political activities in the territory from 1862 until his death in 1892.

Patrick Edward O’Connor was born in Ireland in 1820 or 1821. Along with thousands of others, he and his family left Ireland, arriving in New York City when he was 12. Patrick later dropped the “O” from his name to seem more American but always remained proud of his Irish heritage.

In 1839 Connor joined the U.S. Army, serving first on the Missouri/Iowa frontier, where he experienced his first Indian fighting, and later in the Mexican War. The early years exposed Connor to news of the Mormons in Missouri and Illinois; he may have developed his life-long antipathy to the Mormon church at that time.

The gold rush attracted Connor to California where he engaged in a variety of business and political interests. When the Civil War began he offered to raise volunteer troops and was made colonel of the Third California Infantry. Hoping to fight Rebels, Connor’s men instead established Camp Douglas in Salt Lake City. The troops’ primary duty was to protect the Overland Mail between Fort Churchill, Nevada, and South Pass, Wyoming, from Indian attack. Some federal officials also felt that the Mormons were potentially treasonous and bore watching. Accordingly, Connor established his 2,500-acre camp on the east bench above the city, an excellent vantage point from which to observe the goings-on in the territorial capital. Camp (after 1876, Fort) Douglas was named in honor of the late Democratic Senator Stephen Douglas who had provided the Mormons with some protection while they were in Illinois.

Throughout his service in Utah, Connor carried out a war of words with the Mormon hierarchy. He particularly abhorred polygamy and considered Brigham Young to be a tyrant who flagrantly disregarded federal authority. For his part, Young was annoyed by Connor’s bellicose rhetoric and open plans to overturn Mormon dominance in Utah. Connor considered it his duty to encourage gentiles to settle in the territory. Young discouraged Mormons from mining precious metals, while Connor promoted mining as a means of attracting gentiles and decreasing Mormon influence. Connor’s troops were instrumental in discovering mines in the Bingham area in 1863. To promote Utah’s mineral resources, Connor founded the Union Vedette at Camp Douglas in November 1863. The newspaper provided a different viewpoint on local affairs from that of the church-owned Deseret News.

Although Connor’s men were stationed far from famous Civil War battlefields, they did enter the fury of battle during several punitive missions against the Indians, including the infamous Battle of Bear River in January 1863. The soldiers killed some 250 Shoshone men, women, and children and returned to Salt Lake City as heroes. Connor was awarded a brigadier general’s star.

At the end of the Civil War the volunteers were mustered out and regular army troops took over the post. In the 1870s the crude tents and wooden buildings at Fort Douglas were replaced by the fine stone barracks, chapel, and administrative buildings that still stand. The post became one of the most picturesque and sought-after assignments in the frontier army.

Connor remained in Utah after his military career ended in 1866. He was involved in a variety of mining and business ventures, including railroads and steamships, but great fortune eluded him. In 1870 he joined with other gentiles and Mormon apostates to found the Liberal party which vied in local elections against the Mormon People’s party. The Liberals enjoyed a brief success in Ogden and Salt Lake City elections. He died on December 17, 1891, and was buried at Fort Douglas.