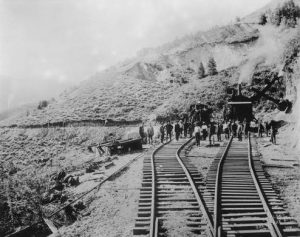 Copper mining has played a significant role in the industrial, economic, and social life of Utah. It has also affected the state’s geography. Copper has many uses. It is very important in the electrical field as it is a good conductor of electricity. Water pipes, architectural trim, weather stripping, and wiring are but a few uses of copper found in buildings. Virtually every electrical appliance in the home or office uses copper—from air conditioners and computers to television sets and waffle irons. Automobiles, boats and ships, airplanes, and railroad engines also use copper. In fact, we come into contact with copper almost constantly in our daily life. 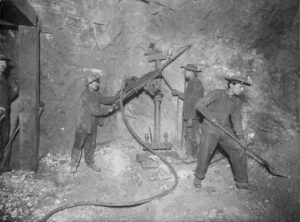 In the 1860s the California Volunteers under Col. Patrick E. Connor discovered copper in the mountains of the Salt Lake Valley. The Walker brothers, Salt Lake City merchants, hauled the first wagonloads of copper from Bingham Canyon in 1868. Throughout the 1870s and 1880s copper was basically a by-product of the lead-silver ores mined in Bingham and elsewhere.

As the demand for copper increased, especially with the development of electric power, Utah’s role as a copper producer became more significant. During the mid-1890s Thomas Weir and Samuel Newhouse appeared on the Utah mining scene, primarily in the Bingham Canyon area, and placed copper mining and smelting in an important role in the state. These businessmen attracted other investors, such as millionaires William Rockefeller and the Guggenheim family. In 1896 the Utah Consolidated Gold Mines, Limited, was organized in London with Newhouse as president and Weir acting as general manager. This meant involvement in the Utah copper industry by British investors. 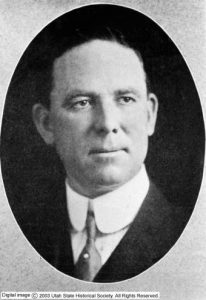 In 1903 the Utah Copper Company was organized by Daniel C. Jackling, a metallurgical engineer from Missouri, who began a rich and prolonged career in copper mining in Utah. Throughout the first decade of the 20th century, many mining companies merged. In 1910 the Guggenheims’ Kennecott Copper Corporation merged the Boston Consolidated Mining Company and the Utah Copper Company to form one large corporation.

Jackling introduced open-pit copper mining to Utah. Ore is mined from the surface using large mechanical shovels to remove the surface rock and dig out the ore. This process had both state and worldwide significance. Jackling became known as the “father of Utah copper mining” and Kennecott an important producer. Jackling also demonstrated that the mining of low-grade ores, containing about 2 percent copper, was profitable when mined and processed in large quantities. He initiated new methods of extracting metal by “floating” the ground ore on water and chemicals to extract the copper and other minerals. This process, called “concentrating,” separates copper minerals from waste material. Smelting extracts copper from these minerals, and refining purifies the metal. 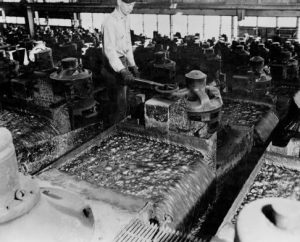 Copper mining in Bingham Canyon expanded so rapidly that most other operations in Utah disappeared. With the Magna Mill and Garfield Smelter and Refinery, Kennecott (with Utah Copper as a subsidiary) developed into one of the leading copper producers in the United States. The town of Bingham grew with it, becoming an important center for waves of immigrants.

During the 1870s Irish and English miners had populated the Bingham area, and in the 1880s British and Scandinavians continued the northern European make-up of the camp. By the end of the decade and into the 1890s Chinese, Finns, and Italians began moving in. The southern and eastern European presence in the canyon grew until the early 1900s. Eastern Mediterranean and Balkan peoples came to fill the need for unskilled laborers. Specific ethnic sections developed—Copperfield (Greeks), Highland Boy (South Slavs), Japtown (Japanese), Carr Fork (Finns and Swedes), and Frogtown (American-born). During the 1912 strike Mexican laborers were introduced, with that group becoming a major cultural presence in Bingham.

Labor strikes in the copper industry became almost a way of life for most workers and company personnel. The first large strike occurred in 1912. Men wanted their union–the Western Federation of Miners (later the International Mine, Mill, and Smelter Workers, and the United Steelworkers of America)–to be recognized by the company. Also, the Greek miners wanted to end the “padrone” system. The Greek padrone at Bingham, Leonidas G. Skliris, supplied the copper company with workers. Skliris demanded money from the Greek men for finding them work, and he made them shop at his store. Although the 1912 strike was lost in terms of union recognition, Skliris was forced to leave. Because of this strike the mining industry suffered, as did smelting and milling. It took five months to return to normal operations. 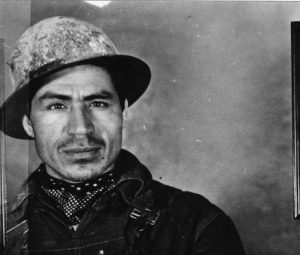 Jesus Arinaz, February 1942, one of many Spanish-speaking workers who came to the Bingham copper mine during World War II.

The Garfield and Magna areas developed as a direct result of copper mining. Utah Copper had constructed the Magna Mill in 1906 as a plant for the coarse crushing, fine crushing, concentrating, and dewatering of copper ores. The site was selected because it was near water and high enough to make it easy to dispose of tailings (waste left over from milling). Another mill near the Magna Mill, constructed in 1909 by Boston Consolidated, later became part of Utah Copper and used the tailings pond. By 1918 the pond covered 5,000 acres. During 1906–7 an electric generating plant was built below the Magna Mill. 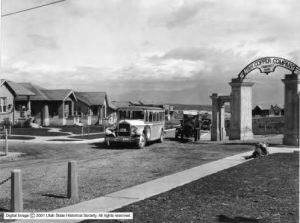 Copper production reached a high point during World War II. Puerto Ricans came to help make up the labor shortage in Bingham Canyon. The Bingham mine is said to have produced one-third of the copper used by the Allies during the war. By 1963 Bingham had produced approximately 8 million tons of metal. At that time Kennecott decided upon an expansion project at the mine, and the towns of Bingham and Lark were dismantled to make way for improvements.

The copper industry declined in the 1970s, and in the 1980s the company was sold to BP Minerals America, a British-owned affiliate of the Standard Oil Company of Ohio. Between 1986 and 1988 Kennecott invested $400 million to modernize facilities at the Utah Copper Division, rendering them highly efficient. From a total workforce of some 7,000 in the 1960s, the company had 2,240 employees in 1989. In July 1989 RTZ Corporation, also British-owned, acquired BP’s interests, renaming the company Kennecott Corporation.

Kennecott produces annually 250,000 tons of copper, 350,000 ounces of gold, 2.5 million ounces of silver, and 8 million pounds of molybdenum. It is considered among the top copper producers in the world and by many as the most efficient. The Bingham mine is currently two and one-half miles across and one-half mile deep and is the largest open-pit copper mine in the world!