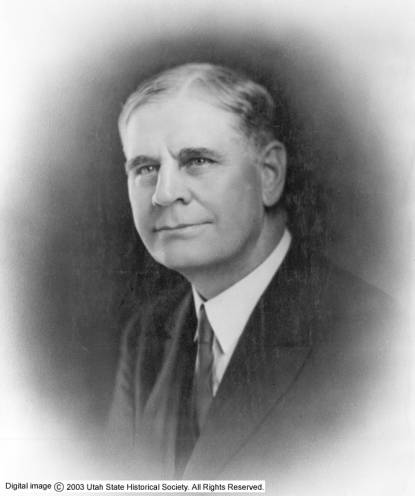 George H. Dern was a Utah mining man, businessman, and politician. He was born in 1872 in Dodge County, Nebraska, the son of John Dern, a farmer-businessman. Dern attended the University of Nebraska for three years. In 1894, before graduating, he migrated to Utah following his father’s lead in the wake of the elder Dern’s investment in mining property at Mercur. George Dern assumed the position of bookkeeper in his father’s enterprise, the Mercur Gold Mining and Milling Company. He quickly moved up in the company becoming general manager in 1900, a post which he continued to hold in the wake of that company’s consolidation and growth into the Consolidated Mercur Gold Mine Company.

Dern developed a reputation as an efficient manager and innovator, developing a vacuum slime-filter process and the Holt-Dern roasting process, the latter process utilized by various mining concerns both in the United States and abroad. In the wake of the Consolidated Mercur’s shutdown in 1913, Dern managed mining concerns in other parts of Utah, including Park City’s famous Ontario Mine (1912–15); the Tintic Milling Co., in partnership with Jesse Knight (1915–19); and the famous Emma Mine in the Alta Mining District (1919–20). Dern was also involved in a wide variety of other Utah business concerns; including ranching, dairying, public utilities, and banking. Dern’s rise as an important Utah politician commenced with his election in 1914 as a Democrat to the Utah State Senate representing Salt Lake County. Serving in this body for two terms (1915–23), he became known as a progressive politician promoting various reform measures, most notably Utah’s first workman’s compensation act in 1917. Despite being a non-Mormon and a Democrat in a state which was predominately Mormon with strong Republic tendencies, Dern got along well, politically. He was personable and empathetic, willing to listen and respond to all points of view. This served him well in his election to the office of Utah governor in 1924. He was successful in defeating his Republican, Mormon opponent, the incumbent governor, Charles R. Mabey, during a year of Republican ascendancy.

As governor for two terms (1925–33), Dern reformed the state’s tax system and improved the financial support of public schools. But he was, perhaps, most noted for his role in securing ratification of a revised Colorado River Compact, which was crucial in paving the way for the future development of the waterway. As chairman of the National Governor’s Conference (1929–30), he became acquainted with Franklin D. Roosevelt, then governor of New York, and gave strong backing to Roosevelt’s 1932 presidential campaign. Following Roosevelt’s election, Dern was appointed Secretary of War (1933-36), becoming the first Utahn to fill a position in a presidential cabinet. Although matters of national defense were of secondary importance to domestic concerns during these first years of the New Deal, Dern managed to enlarge and motorize the army. He died at age sixty-four while serving in this post.