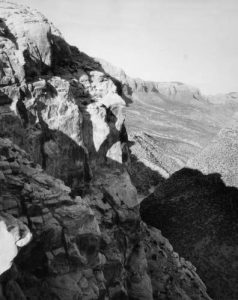 One of the most unique and colorful areas in the entire National Park system is Dinosaur National Monument with its outstanding scientific and scenic interests. The Dinosaur Quarry, six miles north of Jensen, Utah, is world famous for the quantity, variety, and fine degree of preservation of the fossils it has produced. Twenty-three nearly complete skeletons were recovered, representing twelve different species of dinosaurs, most of which were beautifully preserved and as hard as the enclosing rock. The quarry and Split Mountain section nearby are replete with a great variety of material of geologic interest. The dinosaur fossils themselves occur in the Morrison Formation of Upper Jurassic Age and were laid down in an old stream channel one hundred forty million years ago. The quarry represents a sandbar or quiet cove in this ancient stream where the dinosaurs were washed in and lodged in large numbers just as driftwood lodges along sandbars in rivers today.

The history of the quarry began when Professor Earl Douglass of the Carnegie Museum, Pittsburgh, Pennsylvania, discovered outcropping fossil bones on August 19, 1909. The excavation of the bones developed the quarry, which was operated by the Carnegie Museum until 1923. In 1923–24 the National Museum, Washington, D.C., and the University of Utah collected material at the site. No fossils have been removed by anyone since 1924.

It has long been the plan to relief some of the remaining fossil material on the quarry face, leaving it etched out to form a striking exhibit-in-place. Not until national attention was focused on Dinosaur National Monument through the publicity it received as a result of the controversial Echo Park Dam debate were funds made available for the development of the quarry program, which has now become a part of the Park Service Mission 66. This ten-year program for the improvement of National Park Service areas has made several million dollars available for the development of Dinosaur. [On] June 15, 1958, the new Visitor Center and Museum at the quarry opened to the public. The north wall of this unique structure [is] the quarry face itself, upon which are reliefed the dinosaur bones, left in place just as nature deposited them. This [is] one of the most striking exhibits to be seen anywhere.

During the operation of the quarry by Professor Douglass, he was plagued by theft of his fossil material and by vandalism. In the hope that he would have better control of the fossil deposits he tried to stake them out as a mining claim. However, he was told by uninformed personnel of the Department of the Interior, in Washington, that fossils were not minerals and that he would not be permitted to stake his claim. Actually, minerals of one kind or another replace most fossils, so they are minerals; but official Washington was not aware of this, and the professor’s petition was denied. As a last resort he sought to have the quarry set aside as a National Monument and was successful in this when President Woodrow Wilson so proclaimed the eighty acres comprising the quarry area, on October 4, 1915. In 1938 the Monument was enlarged to 204,000 acres to include the scenic canyons of the Green and Yampa rivers. As now constituted three-fourths of Dinosaur National Monument lies in northwestern Colorado, a portion included in what is known as the Canyon Unit.