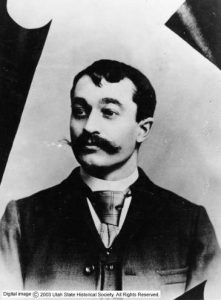 During the 1870s Northeastern Utah became one of the sites associated with what some have called the “Dinosaur Rush.” Within the nation’s scientific community stories of dinosaur finds in Utah, Colorado, and Wyoming created a fervor for excavations. Scientists scoured these areas in hopes of finding the biggest and most exotic dinosaur bones to send to collections and museums throughout the nation.

Earl Douglass, a young paleontologist from Pennsylvania, became involved in the dinosaur craze. He had been hired by the Carnegie Museum in Pittsburgh to find and identify fossil animals. In 1877 he found the bones of a gigantic saurian near Denver, Colorado. The search then took him to the Uinta Basin of northeastern Utah in 1907. When the Carnegie Museum director, Dr. W. J. Holland, visited Douglass the following year, the two men found a dinosaur thigh bone nearly six feet long at a place near the Green River north of Jensen, Utah. They were not equipped to excavate or move the bone. Douglass marked the spot, however, and returned the next year.

Douglass spent the summer of 1909 exploring the area where the thigh bone had been discovered. One day, while climbing Split Mountain, he found eight large vertebrae partially embedded in the rock. With increasing excitement, he spent two whole days chipping into the rock. His efforts finally revealed the entire body of a brontosaur nearly 70 feet long! It took six years for Douglass and a hired crew to excavate, ship, and reassemble the skeleton at the Carnegie Museum Dinosaur Hall in Pittsburgh.

Meanwhile, Douglass kept digging. Mixed with the brontosaur’s skeleton, he found three apatosaurs, a partial stegosaur, and numerous scattered bones of other dinosaurs. As the paleontologist worked westward along the quarry ridge he discovered more bones, including the skeleton of the largest known predator of the time, the allosaur. In all, it took Douglass seven years to excavate the western half of the quarry.

Digging for dinosaurs was hard work. Because of the hardness of the sandstone and granite rocks, workers had to blast the mountainside with dynamite. Debris and rocks from the explosions were hand-pushed in a single mining car to a waste pile. When workers reached a skeleton, more delicate methods were used to prevent destruction of the fragile bones. Small chisels were used to cut the rock close to the bone. The bones were covered with tissue paper and dipped in plaster. Each item was then packed in straw, placed in a sturdy wooden crate, and sent to Pittsburgh by way of a horse-drawn freight to Dragon, Utah, a ride on the Uintah Railroad to Mack, Colorado, and a direct trip on the transcontinental line to Pennsylvania. In the seven years that Douglass spent at the quarry, nine boxcar loads full of dinosaur bones were sent to Pittsburgh—much to the dismay of Utahns who wanted to display these prehistoric treasures closer to home. 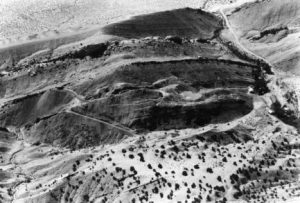 All seemed to be going well for Douglass until 1915 when increasing numbers of homesteaders came into the Uinta Basin. The scientist feared that settlers would disturb dinosaurs bones as yet undiscovered. When he tried to file a mining claim on the land, the government rejected his claim with the argument that bones are not minerals. Dr. Holland, concerned about Douglass’s situation, conferred with a colleague at the Smithsonian Institution in Washington, D.C. Soon, President Woodrow Wilson learned of the problem and quickly took action to resolve it. On October 4, 1915, the president proclaimed 80 acres surrounding the dinosaur quarry as Dinosaur National Monument, bringing it under federal protection. 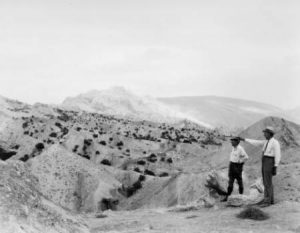 Douglass continued to excavate under the sponsorship of the Carnegie Museum until 1922. After the death of steel magnate Andrew Carnegie in 1919 the museum lost its major source of funds. For two more years Douglass’s work was jointly sponsored by the University of Utah and the Carnegie Museum. By the time he left in 1924 most of the east and west sides of the quarry had been stripped clean. Nearly 350 tons of fossils had been removed. After 1924 no fossil materials were removed from the dinosaur quarry.

Dinosaur National Monument was enlarged in 1938 to 209,000 acres. During the same period a temporary museum was built on the west side of the quarry to accommodate tourists. In 1958 a permanent visitors center was built that is still used today. Since the pioneering discoveries of Earl Douglass many fossils of prehistoric life forms have been discovered throughout Utah, adding to the state’s rich scientific heritage.