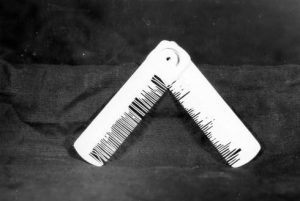 Tragedy was no stranger to western trails, but the sad experience of this ill-fated group has come to symbolize the hardships of all.

A large, well equipped wagon train rolled toward California in 1846. It crossed the plains without difficulty, but as it neared Fort Bridger a dispute arose. They had read Lansford Hastings’ book, The Emigrants Guide to Oregon and California which suggested a shorter route and advertised that Hastings would guide those interested himself. The route—which headed west from Fort Bridger through the Wasatch Mountains, around the southern end of the Great Salt Lake, across the Salt Desert and on to the Humboldt River—was untested by wagons. Still, many were inclined to take it.

The company split and the majority took the longer northern route. The smaller division, joined by several small groups and individuals, headed for Hastings’ Cutoff. They were eighty-seven men, women and children with twenty wagons led by Jacob Donner and James Reed.

At the Weber River they found a note from their guide telling them to turn south and cut a road over the mountain, in the sarcastic words of Reed’s journal, “instead of the canyon which is impassible although 60 wagons passed through.” They camped there four days while Reed rode down the Weber to find Hastings and obtain better guidance. Hastings was guiding two other trains and declined to go back. However, he gave specific instructions on the trail he had used two months earlier. 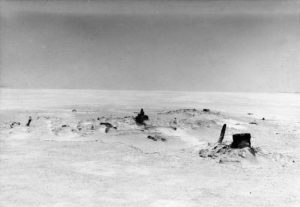 Remains of Donner-Reed wagons on the Salt Flats

It was now 10 August and the new way looked shorter and less troublesome. But instead of three days fighting over the Weber Canyon boulders, they spent twelve cutting a road through brush and timber into the Salt Lake Valley.

Moving swiftly South of the Great Salt Lake, they paused one day to take on water and grass, then plunged into the Great Salt Lake Desert on 30 August. Driving day and night, they dared not stop. But the ground was evidently softer than it had been for the preceding companies. The crossing took six days rather than the two predicted by Hastings. Four of their wagons and many of the animals were lost.

Knowing that time was now critical, they made a swift dash across Nevada, but with no rest the stock could not make the pull over the Sierras before early snows blocked the high passes in late October. Of the eighty-two, forty-seven survived the starvation and cannibalism to be rescued by parties coming east from Sutter’s Fort in February and March, 1847. Thirty-five perished in the snow and cold of the Sierra Nevadas, while five died before they reached the mountains. Two Indians also lost their lives in the rescue attempts. The Donner Party’s fate insured that the Hastings cutoff would not be used by later wagon trains. However the trail they cut through the Wasatch Mountains was the main road into Utah for a decade.