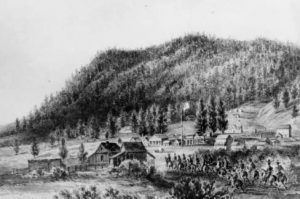 As the beaver supply declined in the West, traders rather than trappers began to dominate, and by the late 1830s, buffalo robes from the High Plains rather than beaver pelts from the Rockies became the most important prize of the fur trade. Few High Plains Indians trapped for beaver, but they readily hunted buffalo, keeping some for themselves and bringing others to traders. To take advantage of this trade, former trappers established forts and trading posts. Among the most important were Bent’s Fort on the upper Arkansas; Forts Vasqez, Jackson, and Lupton on the South Platte; Fort Laramie on the North Platte; and Forts Hall and Boise on the Snake.

Antoine Robidoux was undoubtedly the most active fort builder in Utah. In the winter of 1832–33, Kit Carson, one of the Taos Trappers, established a winter fort he called Fort Kit Carson near the Ute village at White Rocks. In late 1837 or early 1838, Robidoux constructed Fort Uinta near the same site. Fort Uinta stood on the crossroads of the principal trade routes from Taos to Utah Valley, to Fort Hall, and to the Upper Platte. At about the same time, he built Fort Uncomprahgre on the Gunnison River in western Colorado, and he later constructed Fort Robidoux on the Willow Creek Drainage south of Ouray, Utah. Also in 1837, Philip Thompson and two partners constructed Fort Davey Crockett, named for the hero of the Alamo, on the Green River in Browns Hole near the present Utah-Colorado border.

The Utes seemed to have coexisted with the trappers quite well until the Euro-Americans murdered some of their number. In 1844, a party of Utes rode into Santa Fe demanding compensation for the murder of some of their tribe by French trappers. Unsatisfied by the presents offered by the Mexican governor, the Utes attacked Fort Uncompahgre, killing a number of Robidoux’s employees and destroying the fort. Shortly after the attack, Robidoux left Santa Fe for St. Louis, never to return to the mountains.

His removal from the Far West may have been as much the result of changing economic conditions as the destruction of his fort, for by the early 1840s, the decline in the number of beaver marked the nadir of the Rocky Mountain trapping system.

In place of the fur men, a trickle—soon a flood—of settlers began to move west. Prudent businessmen recognized that the central emigrant route along the Platte River, across South Pass, and down the Snake and Columbia Rivers would soon become the most-traveled trade route. Routes suitable for reaching beaver ponds in the Rockies, such as the Rivera and Dominguez-Escalante Trails, were of no use to transcontinental migrants. Increasingly, the emigrants would move west from the United States along the Platte River and across South Pass, bringing their families to build farms and cities rather than trapping and trading and seeking Indian wives.

Although fur-dependent forts, such as Robidoux and Uinta would die, those on the emigrant routes, such as Forts Laramie and Hall, survived and prospered. Among those who understood the change in conditions was Jim Bridger, a Scottish-American from Virginia. Bridger established a fort in 1841 between the mouths of the Big Sandy and Black’s Fork in present-day southwestern Wyoming. He moved the fort to Blacks Fork in 1842. Then seeking a more convenient location, Bridger induced Louis Vasquez, who had operated a fort on the South Platte, to join him in building a new fort on the Black’s Fork in 1843, which they named Fort Bridger.

Others followed Bridger’s lead. In the fall of 1845, Miles Goodyear established a trading post near the confluence of the Weber and Ogden Rivers. Hoping to benefit from the emigrant traffic along the Hastings Cutoff to the California Trail, he worked part-time as a farmer and free trapper. When those ventures failed, he eventually sold out to the Mormons. Still, Goodyear’s post has the distinction of being the oldest site continuously occupied by Euro-Americans in Utah.

Seeking new business ventures following the near extinction of the beaver, those Mountain Men who did not return to the United States or build and operate forts offered their services as guides for settlers and travelers. First-rate trappers, including Thomas Fitzpatrick, Jospeh Walker, James Clyman, James Hudspeth, and Kit Carson, soon found employment by showing the routes they had found to explorers and emigrants.