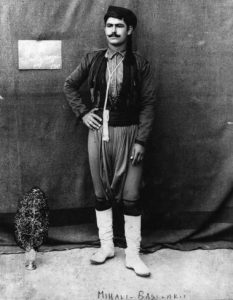 The Greek immigrant was the last of the Europeans to come to America. Fewer than two thousand Greeks were in the entire country before the 1880s. The first arrivals were young boys bought by American naval officers and philanthropists on the Turkish slave block. They were sent to the United States for education and freedom and many distinguished themselves as teachers or naval officers.

It was not until the turn of the century that the yearly Greek immigrants numbered a thousand or more. They were mostly young men and boys escaping poverty by sailing towards the bright light of America. Some came to avoid the compulsory three-year military service in the Greek army where a peasant youth could seldom rise above a menial. A great many came from those parts of Greece still under Ottoman domination which conscripted Greek youths into the dreaded Turkish infantry.

From Ellis Island they made their way about the streets of New York, searching for someone with the same ethnic characteristics as their own who could help them find work. Sometimes they wandered about, lost in the city’s maze, until a labor agent, through signs, offered them work in mills, factories, or road gangs elsewhere. The more fortunate ones, who knew countrymen already working in the textile cities, went directly to them. But some of these men could not adapt to the noise and confusions of the factories and their spirit of adventure led them to climb freights and travel over the plains and mountains to the west.

Some of the men eventually reached Denver where the Greek colony was well established and Greek labor agents regularly made visits to the coffeehouses in search of new recruits for the steel mills of Pueblo, the mines of Leadville, and the many silver mines on the wayside of what is now the “Million Dollar Highway.” Others came through Wyoming, some branching off to the coal mines in Rock Springs or north to the copper pit of Butte, but most of the men came to Salt Lake City to find Andrew Skliris, a legitimate Greek labor agent known to Greek immigrants all over the United States. From Salt Lake City the newer men were sent out to lay rails for the Oregon Short Line, the Union Pacific, and the Denver and Rio Grande railroads. The other residents had more permanent work with the copper mine at Bingham, the mill and smelter of Magna and Garfield, and the railroad yards at Salt Lake. A few men had graduated to ownership of small confectioneries, restaurants, and shoeshine stands. A few others were street vendors. In all there were two thousand Greek men in Salt Lake County by 1905. 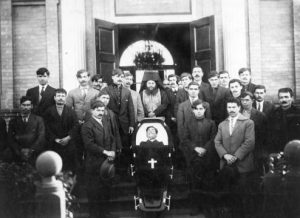 These Greeks, with their history of five hundred years subjection to the Turks that had made them more nationalistic than any ethnic group in the world, and intensely distrustful of all who were not Greek, formed a closely-knit colony around Second and Fourth West near the railroad yards. They had their own stores featuring imported olive oil, octopi, goat cheese, wines, liqueurs, Greek and Turkish tobacco, figs, and dates. There were also several coffeehouses where unscrupulous labor agents often preyed on their fellow countrymen. A newspaper in the Greek language was printed regularly with reports of church and community happenings and florid descriptions of weddings and baptisms.

But Salt Lake City had a great influx of its own immigrants, converts to the 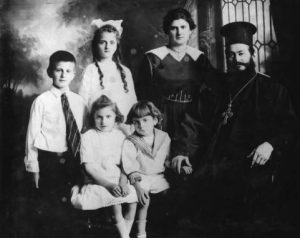 LDS church, and work was not plentiful despite the general air of prosperity in the hammer and clang of new buildings being constructed. At the coffeehouses the newest Greek arrivals heard of the coal mines in Carbon County and, by 1905, there were Greeks in Castle Gate, Spring Canyon, Hiawatha, Sunnyside, Black Hawk, Helper, Winter Quarters, Scofield, and Price. New coal veins were constantly being opened and the young Greeks wrote back to their villages that there was work for all in the mines.

Once there they found themselves spinning in the hectic, boisterous life of Carbon County at the beginning of the century. The very terrain of mining towns that could not grow outwards but must grow up the slopes of the mountains made for a crowded intimate confusion. The boardwalk streets vibrated with labor agents, gamblers, labor “agitators,” all waiting for night when the miners on day shift would emerge from the underground tunnels of coal, each with a good day’s wages. The miners were of every nationality: Germans, Poles, Yugoslavs, Austrians, Italians, Greeks, Armenians, Syrians, Japanese, and native Americans. Besides these there were several Jewish merchants, and the railroad men, who were mostly of Irish descent. In the rest of Utah the Mormon people were far in the majority, but in the mining camps of Carbon County, it was the immigrant peoples who predominated.

Sources: Alexander George Paspatis, doctor of medicine, graduate of Amherst in 1831; Loukas Miltiades, congressman from Wisconsin; John Celivergos Zachos, graduate of Kenyon College in 1836, educator; Captain George Musalas Calvocoresses, graduate of Annapolis, as was his son George Partridge Calvocoresses, who rose to the rank of rear admiral. Most important was Michael Anagnostopoulos, later shortened to Anagnos, who worked with Samuel Gridley Howe to help liberate Crete in 1867. He came to America where he married Howe’s daughter and became head of the Perkin’s Institute for the Blind. There he introduced modern methods for the education of the sightless. In World War II a Liberty ship was named the S. S. Michael Anagnos. A common means of nourishment on the freights was bread dipped in lard that had been heated over hot bricks. Thomas Burgess, Greeks in America (Boston, 1913), 165-66. Louis Adamic in his A Nation of Nations (New York, 1944), 274, says, “The Greek immigrant was more consciously and definitely Greek than the average Slovenian, say, or Pole was Slovenian or Polish.” Evident from Utah Fuel Reports, newspaper accounts, and World War I draft quotas.