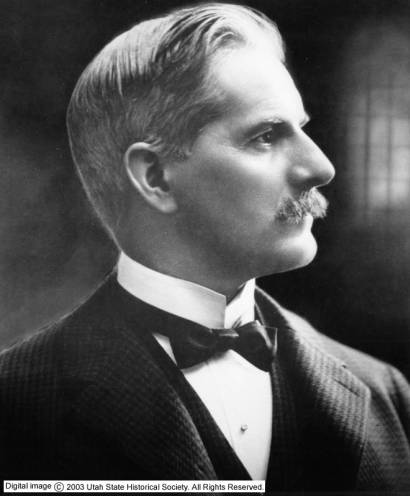 David Eccles was born in Paisley, Scotland, on 12 May 1849. He was the second son in a family of seven children born to William and Sarah Hutchinson Eccles. William, a half-blind wood turner, and Sarah lived in poverty in the Glasgow area until 1863, when, having converted to Mormonism, they migrated with their children to Utah. They located in the Ogden Valley—at first in Liberty, then in Eden.

His older brother having returned to Scotland, David, now fourteen, was the principal support for his family, peddling his father’s wooden products, and trading. Not doing well in Ogden Valley, the family moved in 1867 to Oregon City, in western Oregon. There David and other family members worked in a newly erected woolen mill. David cut cordwood for the mill for a year, went to the Puget Sound area for six months to work for a lumber corporation, and worked another six months on the California and Oregon railroad. The family returned to Ogden in 1869, hoping the completion of the transcontinental railroad would enable them to find work in “Zion.”

David Eccles, now twenty, helped build houses and cut wood in the canyons. He went to Wyoming as well as to the mines at South Pass to freight goods, and later worked in the Union Pacific coal mines. He earned enough to buy a yoke of oxen, and returned to Ogden, where he took a contract to cut and haul logs in Ogden Canyon. He also entered into a partnership with his bishop, David James, to work a sawmill in the Monte Cristo area east of Ogden.

In 1874 for three months Eccles attended Louis Moench’s school in Ogden. There he learned to “figure,” a talent he magnified in subsequent business transactions. At Moench’s school David met Bertha Marie Jensen, a Danish convert-immigrant, whom he married in 1875. Bertha went with him to the mountains to cook for Eccles and his employees at the mill.

Within ten years David had cleared $15,000 from his enterprises and partnerships and launched out with three undertakings: A new retail lumber yard in Ogden, the Eccles Lumber Company; a sawmill, shingle mill, and general store at Scofield, a coal mining district in eastern Utah; and operation of small mills near Hailey and Bellevue, Idaho, where he provided lumber to the incoming miners and their suppliers in the Wood River area. In three years there, Eccles and his partner, A. E. Quantrell, had earned $50,000. When the Wood River mines failed, Eccles set up a mill and general store at Beaver Canyon, near Idaho’s Montana border, which provided ties and lumber for the Utah and Northern Railroad, which was under construction between Ogden and the Montana mines.

Having set a pattern of following up localized opportunities opened up by railroad construction activity, Eccles then acquired some fir and white pine timber tracts in eastern Oregon, at the time the Oregon Short Line was being completed from Pocatello, Idaho, to Portland, Oregon. He built a planing mill, shingle mill, and box factory, then a larger lumber mill, an electric plant, and other enterprises. Soon he set up other mills at other locations in Oregon and Washington. He invited friends and acquaintances in northern Utah to go to Oregon and homestead timber tracts and work for him. He and his associates also built the Sumpter Valley and Mount Hood railroads. All of these operations were profitable and Eccles shipped much of the finished lumber to Utah where it was used in building homes.

Shortly prior to his debut in Baker, Eccles was admired by Ellen Stoddard, the daughter of one of his partners, John Stoddard. As loyal Mormons, both David and Ellen recognized that he might marry a second wife. After a brief courtship they were married. Ellen remained in Baker for several years, after which she established a home in Logan. She and David had nine children.

Meanwhile, in Ogden, David’s wife Bertha bore and reared twelve children. Eccles put all of these children to work at the earliest possible age. They carried water to railroad crews, nailed boxes, kept accounts, stacked lumber. As the children grew older, Eccles sent some of his sons on gospel preaching missions for his church, and supported some of them in university training. One graduated from University of Michigan Law School, another from Columbia University in business and finance, and others had training at Brigham Young College in Logan, at Utah State University and at the University of Utah.

During the twenty-three years between the formation of the Ogden Lumber Company in 1889 and David Eccles’ death in 1912, he probably earned five or six million dollars from his Oregon enterprises. Much of this was invested in Utah. He bought into banks, insurance companies, railroads, beet sugar factories, flour mills, construction companies, condensed milk plants, and canneries, coal mining ventures, electric light plants, a hotel in London and the Grand Ogden House in Ogden. One of the companies in which Eccles was a partner, the Utah Construction Company, built 700 miles of mainline track for the Western Pacific Railroad and became a leader in the heavy construction field.

A community-minded person, Eccles was elected to the Ogden City Council and served as mayor from 1888 to 1890. On two occasions he came to the rescue of the Mormon church in a financial way by lending it large sums of money at no interest. Perhaps his most significant transaction was the sale of a majority interest in several beet sugar factories in Utah and Idaho to Henry Havemeyer of the American Sugar Refining Company in New York. At the time of his death, he was president of sixteen industrial corporations and seven banks. He was also a director in twenty-four other banks and industries. He was Utah’s first multimillionaire.

David Eccles died of a heart attack in 1912 in Salt Lake City; he was only sixty-two years of age.