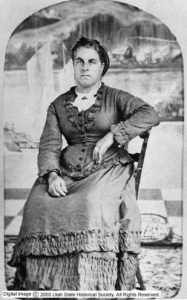 The life of Emma Batchelor Lee French was often one of hardship, struggle, and loss. In her 61 years she witnessed and participated in some of the most memorable and important events of Mormon and western history. Her story—like that of so many women on the western frontier—was also one of hard work, dedication, and perseverance.

Emma Batchelor was born in Sussex County, England, on April 21, 1836. Along with thousands of other English men and women, she and her friend Elizabeth Summers were converted to the Latter-day Saint faith by Mormon missionaries and convinced to emigrate. Emma suffered the hardships of a handcart pioneer, crossing the plains and mountains to Utah with the Willie and Martin companies. These two groups, which got a late start from Iowa City in 1856, suffered perhaps 200 dead when early winter conditions struck. Emma survived, however, and on December 27, 1857, she met John Doyle Lee, a prominent Mormon pioneer, colonist, and aide to church president Brigham Young. On January 7, 1858, Young sealed the two as man and wife.

At the time, Emma was apparently ignorant of the fact that her new husband was in serious trouble. Only months before, in September 1857, Lee had participated in–many said directed–the infamous Mountain Meadows Massacre, in which 120 members of the Fancher immigrant party on their way to California had been attacked and killed by Indians and Mormon militiamen. John and his 19 plural wives, especially Emma, would spend much of the next two decades in an ultimately vain attempt to keep him out of reach of the law.

John Doyle and Emma set up housekeeping at Harmony, one of Brigham Young’s “outer cordon” communities established in 1852 at the edge of the Great Basin in southwestern Utah. There, Emma and her growing family lived a rough frontier life, growing their own food and supplying most of their other wants themselves. She eventually gave birth five times, including a set of twins.

By the late 1860s, however, external pressures were mounting on Utah. Federal officials and others demanded justice for the Mountain Meadows Massacre, and John D. Lee was the man most wanted. In 1870 Brigham Young officially excommunicated Lee, although the church continued to assign him important tasks. In late 1871 Lee was requested to establish a ferry crossing on the Colorado River, approximately 15 miles south of the present Utah/Arizona border, near where the Paria River entered the Colorado (hence the early name Paria Crossing). The spot had been used for at least 200 years; it is the only place between Moab, Utah, and Needles, California where a wagon could easily be driven to the river’s banks from either side. Fathers Dominguez and Escalante attempted to cross at the spot, which they called Salsipuedes (“get out if you can”), during their historic explorations on October 26, 1776, but high and fast-flowing water frustrated the attempt.

The Lees established their ferry service in 1872, and the site soon became an important link between southern Utah and the Mormon settlements in Arizona and beyond. Emma and John built their home here at a site they called Lonely Dell, reflecting its isolation. Over the ensuing years Emma, along with Lee’s wife Rachel and thirteen children who accompanied them to the site, made many improvements, including a substantial house and gardens. Lonely Dell became an important resupply point for thousands of immigrants and explorers; in July 1872, the Lees entertained members of John Wesley Powell’s Colorado River exploration party. Lee was frequently absent from Lonely Dell, however, sometimes fleeing from the law and sometimes visiting his other homes and wives. Emma and her family were left to manage the ferry and homestead.

In the summer of 1873 Lee went into hiding, but the noose was tightening. He was finally captured at Panguitch on November 7, 1874. Emma remained loyal to him for the three years of his confinement and through his two trials; she brought food to him in the Beaver jail and was even accused of helping to plot his escape. On March 23, 1877, John Doyle Lee was executed by firing squad at the site of the Mountain Meadows Massacre–the only person to pay with his life for this notorious crime.

Emma continued to operate the ferry, as she so often had during her husband’s absences. In 1879 the LDS church purchased the service from her and operated the ferry until 1909. Emma married a prospector named Franklin French and moved to Winslow, Arizona. For the remaining years of her life she put her childbirth experiences to use as a midwife; many of her loyal “customers” called her “Dr. French.” Emma died on November 16, 1897.