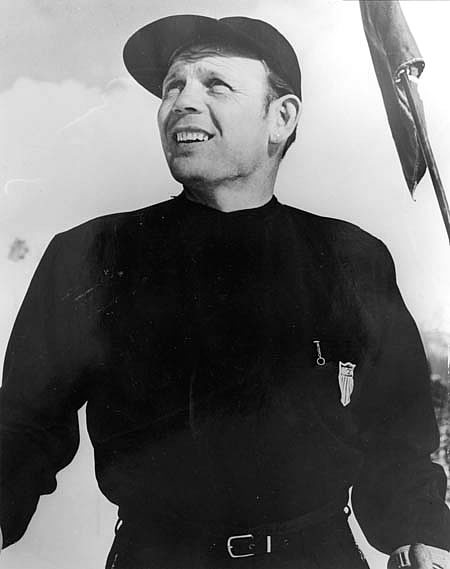 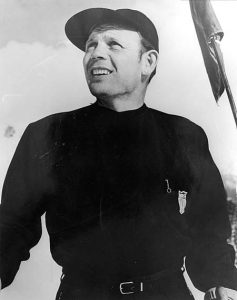 Alf Engen was born in 1909 in Stenberg, Norway, the first-born son of a famous skiing father, and was subsequently reared to ski. Although a native Norwegian, Engen emigrated to the United States in 1919 and ultimately settled in Utah in 1948. This move proved to be very beneficial to Utah—Engen’s reputation as a world-class skier and his numerous contributions to skiing in all areas have added significantly to Utah’s renowned ski industry. It is Engen, in fact, who is credited with developing the technique of powder skiing in Utah’s Wasatch Mountains.

Engen’s success as a skier is beyond compare. He began his impressive professional career by capturing the National Jumping Champion title eight times between the years of 1931 and 1946. Furthermore, at the age of 37 and on borrowed skis, he won the 1946 National Jumping title by leaping 259 feet. He was also the National Classic Champion (cross country and jumping combined) twice during these years in 1939 and 1941. After learning how to downhill ski at the age of 30, Engen became national downhill and slalom champion in 1947. Engen was also the recipient of numerous awards including the All-American Ski Trophy, 1937, Americanism Award in 1940, Helm’s Hall of Fame Award in 1954; and Skier’s Hall of Fame Award in 1956.

Engen married Evelyn Peck, daughter of Mr. and Mrs. K. M. Peck of Centerville, in 1942. They had a son, Alan, who, like his father, gained game as a skier. Alf Engen’s entire life has been devoted to skiing. He has received numerous trophies and a plethora of awards including “outstanding skier of the first 50 years of the twentieth Century” by the U.S. Ski Association.

Alf Engen was not only known for his personal skiing accomplishments, but for his contributions to the industry at large. Among other contributions, he assisted with the operation and ski lessons at Alta and Snow Basin Ski Schools during the 1945-46 ski season. Engen spent the 1946-47 season training Olympic Ski Contenders and the following season he coached the 1948 U.S. Olympic Ski Team. In 1948, he returned to Utah where he directed the Alta Ski School, the Little Mountain Ski School, and the Deseret News Free Ski School.

Engen once said, “Skiing is a great sport, and Utah has one of the finest natural playgrounds in the world. I hope some day to see it further developed.” Utah’s playground has most definitely been “further developed” with much indebted to Alf Engen. On 2 May 1981, at the age of seventy-one, Engen was honored by the Utah Ski Association for his many efforts in the sport of skiing and to the present day (1994) he enjoys the sport he helped popularize in Utah.