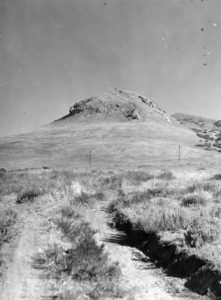 Ensign Peak is the summit of a hill just north of downtown Salt Lake City (1.4 miles north of the Salt Lake Temple); in fact, Salt Lake City was built exactly south of Ensign Peak. The peak rises 1,080 feet above the valley floor and stands out as a prominent geological formation evident from all directions. The summit is rounded, devoid of vegetation, and capped with a hard conglomerate stone formation. It is part of the foothills of the Wasatch Range.

On 26 July 1847 Brigham Young and several others climbed to the top which he named “Ensign Peak,” as he reported the event in his journal. They used the view from the summit to visually explore the entire valley.

The significance of the name, according to the pioneers, comes from the biblical prophecy: “He will lift up an ensign unto the nations. . . . He lifteth up an ensign on the mountains.” (Isa 5:26; 18:3). The pioneers did not erect the U.S. flag on the Peak on 26 July as widely reported, but they did plan to fly the “Standard of the Nations,” an invitation for all nations to immigrate to Utah.

The locating of the east side of the temple just south of this Peak comes from the statement of George A. Smith who explained that while still in Nauvoo, Illinois, Brigham Young “had a vision of Joseph Smith who showed him the mountain we now call Ensign Peak. . . . and there was an ensign [flag] fell upon that peak, and Joseph said ‘build under the point where the colors fall and you will prosper and have peace.'” Hence, Temple Square and Salt Lake City were laid out due south of the peak.

From this peak at least one departing Mormon missionary received the temple ceremony. Addison Pratt, about to depart to Hawaii in 1849, was taken to the summit of Ensign Peak and there received the endowment from Brigham Young and several leading elders. Brigham Young said he specially consecrated the Peak for this purpose.

Many organizations in the State have adopted “Ensign” as part of their name, such as: Ensign Stake, Ensign Ward, Ensign Elementary School, Ensign magazine, among numerous others.