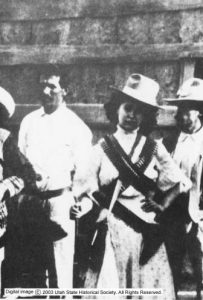 Etta Place, shown here in a photo taken in either Mexico or Texas with a women’s group called Las Soldaderas, was a friend and outlaw companion of Butch Cassidy and the Sundance Kid.

According to legend, Butch Cassidy and the Sundance Kid (Harry Longabaugh) infamous Utah outlaws noted throughout the West for their daring train, bank, and payroll heists, had a variety of female companions–but none quite as mysterious as the wild and sophisticated Etta Place. Some say she was a native of eastern Utah and grew up in the Castle Gate-Price region. Others claim she was born in New York or Pennsylvania. Separating facts from legend is nearly impossible, making Place the true “mystery woman” of the notorious “Wild Bunch.” That is until Doris Karren Burton, a worker at the Outlaw Trail History Center at the Uintah County Library, instigated a series of computer photograph analyses of Place that she published in 1992. The results linked Place to another colorful figure with ties to Utah’s past: Ann Bassett, the so-called Queen of the Cattle Rustlers. Burton’s fascinating research and the Bassett-Place connection illuminate the little known female side of Utah’s turn-of-the-century outlaws.

The story unfolds in a rugged area on the Green River known as Brown’s Park (also called Brown’s Hole). Cut by impassable canyons and unfordable rivers, gulches, and gullies, Brown’s Park not only offered an ideal hideout to fugitives but also provided excellent winter and summer range for stolen stock. The region was, in fact, used as such by the Wild Bunch on several occasions, and even the permanent residents of Brown’s Park did their share of rustling. Ann Bassett was no different; she spent much of her life as a rancher in Brown’s Park, and there she met and forged a friendship with Cassidy and Sundance.

Closer scrutiny of Ann’s life reveals that perhaps she was more than a friend to the two outlaws. Events suggest parallels too numerous to be coincidental between her and Etta Place, the cryptic outlaw companion of the Wild Bunch. Pinkerton National Detective Agency records give a physical description of Place that matches Bassett almost identically. Moreover, both women were noted for their classic good looks, intelligence, expert horsemanship, prowess with guns, and reputations as “loose” ladies. Adding to the likelihood that the two women were actually the same person is the fact that soon after each of Bassett’s disappearances from Brown’s Park, Place turned up with Cassidy and Sundance.

Ann Bassett was born in Brown’s Park on May 25, 1878, to Herb and Elizabeth Bassett and experienced a childhood filled with every aspect of ranch life, including horse riding, calf roping, and a large dose of wild freedom. In 1894, two years after her mother’s death, Ann’s father enrolled her in St. Mary’s Catholic School in Salt Lake City in an attempt to curb her wild side. After only a year the nuns asked the uncontrollable Ann to leave, and she returned to Brown’s Park. During one of Cassidy’s visits to the region he developed a close relationship with Ann, and it was likely during the winter of 1896–97 that she first used the alias Etta Place. That winter Place turned up in Emery County as Cassidy’s companion. Apparently the lovers shared a cabin at Robber’s Roost, the famous outlaw hideout in southeastern Utah, with Elzy Lay and his new bride, Maude Davis, and other gang members.

Upon returning home, Ann took to cattle rustling and sabotage to defend her family’s holdings against the Two-Bar Ranch, a large cattle company vying for control of Brown’s Park. Meanwhile, the Wild Bunch left Utah and congregated in Texas in the fall of 1900. A few months later Ann left Brown’s Park and Etta Place turned up in Texas. A February 2, 1901, article in the Vernal Express noted that “Miss Annie Bassett left on this morning’s stage for Texas.” Again, using the alias Etta Place, Bassett met Cassidy and Sundance, this time as a companion of the latter, and the trio journeyed to New York and then sailed to South America. Pinkerton records indicate that Place and Sundance returned to the U.S. in July 1902. Six months later Ann reappeared in Vernal, and the newspaper reported that she had been “traveling” for two years.

Mysteriously, news of Etta Place largely disappeared after a few more rendezvous in the early 20th century with Sundance, and possibly Cassidy, south of the border. Ann married Frank Willis, a cowboy and prospector, in 1923 and eventually settled in the small southwestern Utah town of Leeds where she died in 1956. To fulfill her wish to have her cremated remains scattered in her beloved Brown’s Park, Frank drove there but “didn’t have the heart to throw Ann out.” Her ashes remained in the trunk of his car until he died in 1963. Family members then buried Ann’s ashes at an unmarked location in Brown’s Park.

Perhaps the historical evidence suggesting that Bassett and Place were the same person is purely coincidental, but when surviving photographs of each are factored in the results seem indisputable. Doris Burton, with the help of Bill Webb, a member of the Outlaw Trail History Association, researched the historical similarities between the two women and sent pictures of each woman to Dr. Thomas G. Kyle of the Computer Research Group at Los Alamos National Laboratory. He had previously performed many such comparisons for government intelligence agencies. Using the computer to bring out characteristics too dim for the eye to recognize, Kyle ran a series of tests on the physical features of the two women. He concluded that there was only a 1 in 5,000 chance that the two women were different people. He was ready to remove the photos from his screen when he noticed something unusual he had somehow overlooked. A tiny elongated area at the top center of Ann’s forehead seemed to be missing hair. Kyle had mistaken the spot for a part but upon further examination believed it to be a scar or unusual cowlick. He then zoomed in on Etta’s head and found the same defect. He concluded: “The fact that the two women match in all their features and have this same defect removes all reasonable doubt that the two are the same person.” Ann Bassett, Queen of the Cattle Rustlers, was Etta Place, queen of the outlaws.