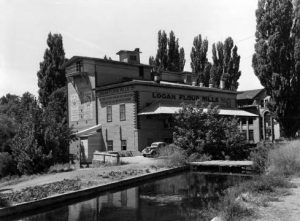 Logan Flour Mills, One of the oldest mills in Utah to run by hydroelectric power.

The transition in flour milling was not unlike that of other mechanized aspects of the new agriculture. New forms of power and mechanical improvements of machinery impacted the millers as well as the farmers of Davis County. To keep abreast of improvements meant replacing water power in the mills with steam or electricity and substituting metal rollers for milling stones. Owners of the county’s pioneer mills had few economic incentives to upgrade their old equipment. Thus, they were caught short when entrepreneurs built new commercial flour mills to produce flour for export. In 1886, eighty-seven Utah mills were listed by Cawker’s Biennial Flour Mill Directory. Most of these first-generation mills, including the half-dozen in Davis County, would soon be gone.

Kaysville miller John Weinel was one of the nineteenth-century mill operators who tried to improve his equipment as new machinery became available. He replaced his wooden waterwheel with a steel one shipped from the east in 1869. He then discarded his native grinding stones for two superior stones brought west by the railroad from St. Louis. Weinel did not make the change from water power to steam or electricity, nor did he install metal rollers to increase productivity; after Weinel’s death in 1889, those who ran the mill could not compete with new, modern plants. They limited their output to chopping animal feed. The mill closed after strong winds in 1906 caved in the west wall and made the building unsafe.

The demise of other pioneer mills in the county followed a similar pattern. Unable to compete due to their antiquated equipment, all of the old mills closed in the decades surrounding the turn of the century when new technology made traditional methods inefficient. Around 1890 William D. Major found other uses for the Kimball Mill building in Bountiful. He opened a confectionery inside the mill and maintained the millpond for swimming and ice skating. In Centerville, James Miller simply abandoned the old Anson Call mill. A few years later, Henry Steed and Charles Bourne closed their North Cottonwood gristmill in Farmington. Fred Coombs and Jonathan D. Wood kept the nearby Rock Flouring Mill going into the early 1900s. For a time, the sturdy rock walls housed an electric power generating plant and then served as an ice house before becoming a private residence then a restaurant, then, once again, a home.

Replacing the old area mills were two up-to-date facilities designed for commercial production using steam rollers. Investors strategically built these new mills adjacent to the Union Pacific Railroad tracks in northern Davis County. The builders were a younger generation, most of them successful commercial farmers or livestock growers. Ephraim P. Ellison, H. Gibsons, and others organized the first of these new-generation plants in 1890. Their business was known as the Layton Roller Mills. It was located just south of the Farmer’s Union on Layton’s Main Street. By 1903 the mill was the most productive in the state; in a twenty-four-hour day, it could turn out 440 sacks of flour.