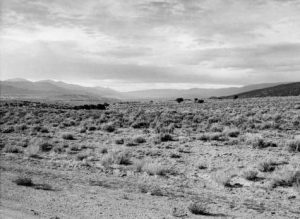 In 1836 William Craig, Philip Thompson, and Previtt Sinclair built a fort at Brown’s Hole, where Vermillion Creek merges with the Green River. Brown’s Hole was a favorite wintering place for mountain men and Indians because of the mild winters and abundant forage and game animals. After news of the fall of the Alamo and the death of Davy Crockett reached the mountains, the owners named their fort after that fallen hero. However, the mountain men usually referred to the place as “Fort Misery” because of the deplorable conditions. Described as a “hollow square,” the fort was built of logs and had a dirt roof and dirt floor, which quickly turned into a quagmire in foul weather. It was termed by one contemporary as “the meanest fort in the West,” yet, for a short time Fort Davy Crockett became the social center of the Rocky Mountains. Business at the fort included trading with Indians and free trappers, while other hunters and trappers were hired at the fort. Also, it was a place for travelers headed west to obtain supplies.

Fort Davy Crockett went out of business in the late summer of 1840. After the 1839 rendezvous, many of the trappers went to the fort to winter. Demoralized over the prospects of poor trapping, and destitute with even poorer prices, Philip Thompson and some of free trappers turned to horse stealing. After a visit to Fort Hall, Thompson and a group of eleven others stole over thirty horses from friendly Shoshone Indians. When the thieves arrived at the fort, Thompson’s partners and the other mountain men were outraged. The miscreants fled southward with the stolen horses. Joe Meeks, William Craig, Robert Newell, Kit Carson, and twenty-five others led by Joseph Walker pursued and caught up with the thieves at the junction of the Duchesne and Green rivers. After a short battle, the horses were recovered and the thieves fled the country. The partnership broke up over this incident and the post was abandoned. Never well built, upon abandonment the fort quickly fell to ruin. When Captain John C. Fremont, heading west on his 1844 trip to California, camped at the site of the fort he recorded that little was left standing.